Late to the Party: Tim Burton and Johnny Depp- By Dustin Brewer

It’s weird seeing Tim Burton and Johnny Depp working together on a movie like ‘Dark Shadows,’ but somehow, it works. Dustin takes a look at this new, exciting pairing. 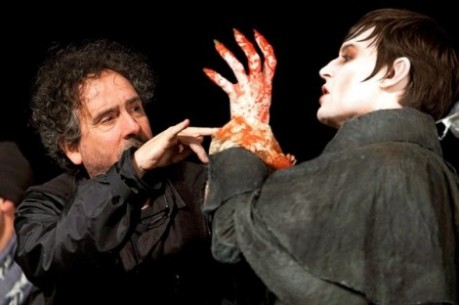 I recently had a chance to see the movie ‘Dark Shadows’ and all I can say is wow, make sure you keep an eye out for the up-and-coming team of director Tim Burton and actor Johnny Depp.

I know, it may seem like a risk, the director of ‘Pee-Wee’s Big Adventure’ and the star of movies like ‘Nick of Time’ and ‘Dead Man’ tackling a gothic tale about witches and vampires, but the pair are up to the task of stepping out of their respective comfort zones.

The film tells the story of Barnabus Collins, a young man in the 1700’s who’s cursed to spend eternity entombed as a vampire after he breaks the heart of a love-struck witch. However, two centuries later, Barnabus is accidentally released and he suddenly finds himself in 1972!  We then follow Barnabus as he tries to adjust to his new surroundings.

The film also boasts a stellar supporting cast including; Catwoman herself; Michelle Pfeiffer, Jackie Earl Haley from the ‘Bad News Bears’ and Helena Bonham Carter, who hopefully Tim Burton can find a role for in one of his movies somewhere down the line because she’s just great.

The strength of the movie however, is in fresh-faced young actor Johnny Depp and his portrayal of Barnabus Collins. It’s surprising to see Depp as a vampire and the odd ticks and quirks he plays him with do take a little while to get used to because it’s such a different character for Depp.

Tim Burton’s direction also excels here, there’s a creepy tone throughout the movie and the sets are often unsettling and full of medieval architecture. The creepy mood of the film is also punctuated with an eerie score from Danny Elfman, who is really branching out with his arrangements since ‘the Simpsons.’

It should be noted though, while the film is a bit creepy, it isn’t too scary for younger audiences, which is great, because everyone can see it. Normally, one would be hesitant to bring younger kids to see a movie about vampires, witches and werewolves, but somehow, they’ve managed to translate these things in a way that everyone can enjoy.

It could’ve been a big disaster; getting a director like Tim Burton to make a movie about vampires and witches, that stars Johnny Depp as a fish-out-of-water vampire trying to adapt to his new surroundings, but the pair work surprisingly well together. Hopefully this inspires the two of them to collaborate again in the future because they really seem to bring out the best in each other. They both seem to have long careers ahead of them, making movies of all different genres and topics, for audiences everywhere to love.