Terrell Owens, This is Your Life (updated!)- by Dustin Brewer

Upon hearing the news that Terrell Owens has been released from his IFL team, Dustin examines Owens’ unique relationship with the media and the hope that it will not limit his chance at the Hall of Fame. 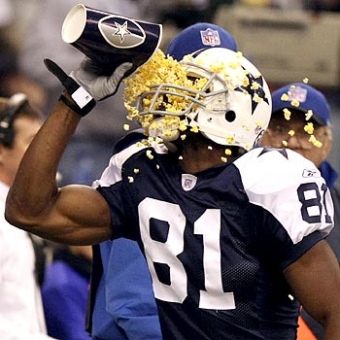 It’s come to this, once hailed as a sure-fire hall-of-fame candidate and widely considered one of the best wide receivers of all time; Terrell Owens has found himself cut from the Indoor Football League team the Allen Wranglers.

Once again, it seems his notorious diva-like behavior is to blame for his latest unemployment and likely, the end of his professional football career.

It’s a shame to see such an explosive player reduced to this. The numbers suggest he’ll go down as one of the best ever, but based on his relationship with the media over the years, it seems they have no intention of letting it be that easy.

When you think of Terrell Owens, do you think of his game winning touchdown as time expired in the 1998 playoffs as a 49er? Or does your mind immediately pull up a tearful, “That’s my quarterback,” impression?

Here now, is a career retrospect of Terrell ‘T.O.’ Owens, a receiver as beloved as hated, and as chastised for his work off the field as he was respected for his work on it. 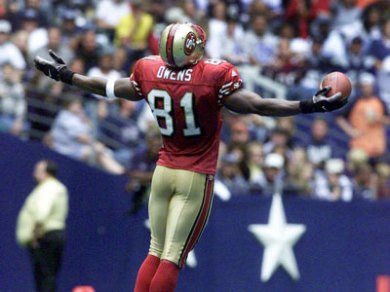 Drafted by the 49ers in 1996, Owens’ career earned both the praise of the media as well as its’ ire. For the 49ers, he emerged as a budding star in 1997, when Jerry Rice was lost early in the season to a torn ACL. Owens had 936 yards receiving, and eight touchdowns. What also emerged was a penchant for flamboyant end zone celebrations. In 2000, while playing against the Dallas Cowboys, Owens celebrated his two touchdowns by sprinting to the middle of the field and posing on the Cowboys’ star logo, where he was promptly blasted by Cowboys’ safety George Teague. His successful time with the 49ers came to an abrupt end after Owens insinuated that then 49ers QB Jeff Garcia was homosexual, the team tried to trade Owens to the Baltimore Ravens but he challenged the teams’ right and eventually signed with the Philadelphia Eagles in time for the 2004 season. 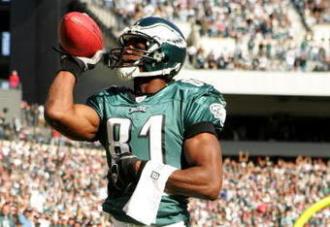 Owens started his time with the team amidst some controversy after a skit was aired prior to Monday Night Football that featured Owens in uniform and a towel wearing Nicollette Sheridan (in character from her show ‘Desperate Housewives). The team however, started the ’04 season with tremendous success, going 13-1 before Owens was injured in a game against the Cowboys. After a, now illegal, horse-collar tackle from Roy Williams, Owens suffered a severe ankle-sprain as well as a fractured fibula. The team ended up in the Super Bowl that year, and Owens and his unusual recovery methods shocked the sports world with an appearance in the game, where he caught nine passes for 122 yards, albeit, in a loss to the New England Patriots. 2005, his second and final season with the team, was far less dynamic. Before the season started, Owens sparked controversy after telling the media that although he was playing hurt in the Super Bowl, he “wasn’t the guy who got tired in the Super Bowl,” a message the media took as a shot at Eagles QB Donovan McNabb. The two seemed to feud both privately and publically throughout the season, with Owens being suspended four games without pay by the team for continued criticism, and he was deactivated by the team for the rest of the season, bringing his time in Philadelphia to a confounding conclusion. 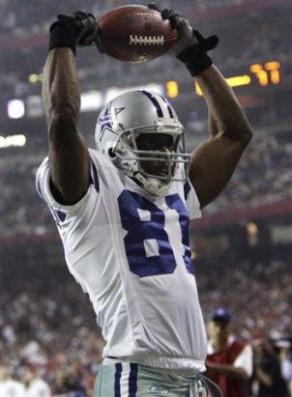 You would think Owens’ tumultuous last season for the Eagles would be enough to scare any team away from the receiver, but, low and behold, the Dallas Cowboys signed him to a 3-year, 25 million dollar contract. Owens was injured in week two of the 2006 season, damaging his finger and required surgery. After promising to play in the Cowboys game two weeks later against the Eagles, what would be his first game against his former team, Owens overdosed on Hydrocodone, pain medication he was prescribed following surgery. Owens denied the O.D. was a suicide attempt and was able to return to the field in time to play against the Eagles, a 38-24 loss that saw Owens catch just three passes for 45 yards. He later confirmed that in the teams’ locker room after the game, he went on a tirade asking why he was even signed to the team if they weren’t going to throw to him more, which surely helped Cowboys fans sleep easier at night. Unable to avoid courting controversy for long, Owens confirmed that in a game against the Atlanta Falcons, he spit in the face of Falcons’ cornerback DeAngelo Hall and was fined $35,000 by the NFL. The team made the playoffs in ’06 but lost in the first round to the Seattle Seahawks. 2007 saw Owens set a number of Cowboys records, including 15 touchdown catches and four TD’s in a single game, against the porous Washington Redskins. Overshadowing his great regular season, after the Cowboys were eliminated by the eventual Super Bowl champion New York Giants, Owens infamously began crying during his postgame interview when asked about the poor play of Cowboys QB Tony Romo in the game. His election to the Pro Bowl was replaced by the sounds of media outlets replaying his tearful, “That’s my quarterback” episode. The 2008 season was a resounding success as Owens started all 16 games and finished with over 1,000 yards and 10 touchdowns. However, the team opted to release Owens from his contract, sending him into NFL free agency once again. 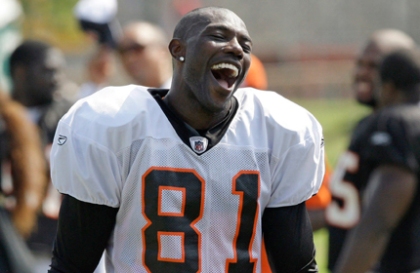 The release from Dallas led many to speculate that Owens’ career was over after 13 seasons, but in March of 2009, Owens signed a one-year deal with the Buffalo Bills. Though he was given a key to the city prior to the season starting, the season was a disappointment for both Owens and the team as they finished 6-10 and Owens had only 55 receptions with 5 touchdowns. The drastic decrease in statistical areas helped the talk that his career was over get louder, and the team declined to re-sign him, putting his future in limbo once more. In free agency once again, Owens did the one thing any 14-year veteran widely criticized and thought to be over the hill would do, he signed a one-year contract with the Cincinnati Bengals. The news that ‘T.O.’ would be teaming with Chad ‘Not Even the Right Phonetics’ Ochocinco almost sent the sports world into hysteria. The thought of the two receivers most known for outlandish celebrations and league fines, led many to write the signing off as a mere publicity stunt. Owens however, didn’t seem to hear the rumors of his professional demise. In only 14 games, Owens far surpassed his Bills stats; he led the team in touchdowns (9), receptions (72) and yards (983).  His season was cut short by a torn ACL and due to the injury, the team declined to resign him. 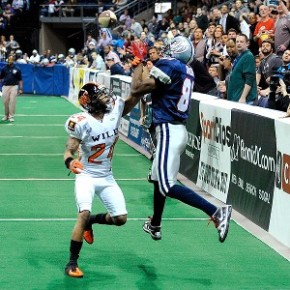 In 2009, while with the Bills, Owens was given a reality show through VH1, “The T.O. Show” followed him as a free agent looking for a team to call his. The show also featured his best friend and his publicists as they tried to find him love, and get his career back on track. While the show was a ratings success, it proved unable to help rekindle a professional interest in Owens after his time with the Bengals and as he recovered from a torn ACL. After being cleared to play in October of 2011, Owens held a televised workout to show his progress in an attempt to silence some of the talks that his career was over; however, not one NFL team chose to attend the event. In November, Owens received an offer from the Indoor Football League team, the Allen Wranglers. Owens accepted the offer, a move many took as his acceptance to the end of his NFL career, although he also received a share of ownership in the team. He did have some success with the Wranglers, in 8 games with the team; he had 35 receptions for 420 yards with 10 touchdowns. The success however, didn’t last long. Less than a year after signing with the team, Owens was released from his contract by the team after reportedly skipping a team charity function at a local hospital. Perhaps kicking him while he was down, the team demanded Owens return the 2012 Jeep he was given, as well as evicting him from his house in the area and sending him a check for his shares’ worth, allegedly, only $50.

It was announced yesterday that T.O. has been signed to a 1-year, $1 million contract with the Seattle Seahawks. He allegedly dazzled in his workout for the team, showing a physique and speed not usually possessed by a man 38-years of age. The only question is will the Seahawks quarterback rotation of Matt Flynn, Tavaris Jackson, Russell Wilson and Josh Portis (?) will be enough to satisfy Owens’ notoriously high expectations.

It’s in Owens’ best interest to try and prolong his career by just appreciating the chance the Seahawks have given him, and it’s likely he is appreciative, it just remains to be seen if he can change his ways after so many years, even when his livelihood is on the line.

It may be hard to imagine that just a few years ago, Terrell Owens was a sure-fire Hall of Fame receiver, but his penchant for attention and controversy never seemed to let the media focus on the raw talent. Now, he’s known for celebrations and off-field antics, which unjustly overshadow the fantastic career he’s had. In a league celebrated by stats, there is no ignoring the numbers; 1,056 receptions (sixth all-time) 15,654 yards (second all-time, behind only Jerry Rice) and 147 receiving touchdowns (tied for second all-time with Randy Moss, behind Jerry Rice.)

If this really is the end of his NFL career, he may never get the credit he fully deserves. It’s far easier to remember the controversies and the fines, than it is the achievements and on-field play. But when the only people who can be mentioned in the same breath as Owens in terms of statistics are Randy Moss and Jerry Rice, hopefully one day he can join them in the Hall of Fame, where he belongs.

Like Loading…
← Late to the Party: Tim Burton and Johnny Depp- By Dustin Brewer
→ Where’s the beef ? The sad state of hip-hop – by Cameron Heffernan