A change is coming – By Cameron Heffernan

After Saturday night the sports world was rocked in good ways, and bad. Cameron Heffernan gives his evaluation of the Pacquiao/Bradley fight, Kings/Devils game five and Celtics/Heat. 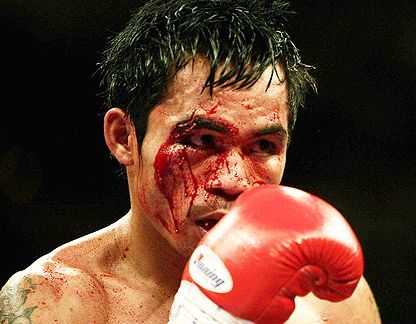 Editor’s note: I realized i had to write something regarding Saturday’s events in a whole because you could just feel an odd sense of change in the air. So as i jumped form a going away party for a buddy in a Hooters and my friend’s house for the late night fight these few points were what i gathered on the change coming to the sports landscape.

Normally in sports when one team wins it is because they are better; it isn’t like the movies where it’s a battle between good and evil and good no matter what will prevail. On Saturday though it felt as if the bad guys all won; LeBron James and the Heat vanquished the Celtics setting in motion a changing of the guard in the NBA, Manny Pacquiao lost in a split decision to Timothy Bradley in a highly controversial and outright wrong decision, and the Los Angeles Kings were yet again unable to shut the door on the New Jersey Devils allowing them to come back 3 to 2 in the best-of-7 in a sport where it is very possible for anyone to comeback from being down 0-3 in a series.

We normally don’t see athletes or sports figures as evil, we may root against some but we never truly look at them as inherently evil, like a devil or demon per say. The feeling on Saturday though was that of the good guys lost and the bad guys won.

Most of America wants to see LeBron James fail at every opportunity he gets, we all want to see Manny P win so it adds more allure to a possible Mayweather/Pacquiao fight that may never happen, and the Kings have been the darling of the sports world ever since they began their Cinderella story as an 8-seed overachieving, but on Saturday the sports gods were having none of that. They wanted James to vanquish the Celtics so it would usher in a new youthful revolution in the NBA with the Thunder doing the same in the Western Conference. Bradley was owned by Manny P the entire way through the match; Bradley honestly, maybe, maybe, won two-to-three rounds and that’s it, oh yeah there’s 12 rounds so you do the math. Finally, the Kings who have been a juggernaut on the road, going 11-0 before Saturdays’ loss, finally decided to not show up on the opposing team’s ice.

In the NBA there is always a transitional period, at the end of the Russell/Celtics era of the 60’s it became a toss-up in the 70’s and then it was dominated by Bird and Magic in the 80’s which gave way to Jordan in the 90’s and Kobe/Shaq- Duncan/Spurs in the 2000’s. This is the way it goes, players get old, they lose the will to play at a high level and they fade away. The Celtics did exactly that; leading most of the game, an old, beat-up, tired, and flawed Celtics team (one of the best in a long while, even though they don’t have much to show for it) faded into an unknown oblivion where a group of men who have been playing for five-years together now don’t know if they’ll be in the same uniform next year. Paul Pierce who’s spent his entire career with the Celtics could be trade bait in the off-season, Kevin Garnett and Ray Allen both are free agents come the summer and Boston can either opt to re-sign them or not, simple as that. Rajon(triple-double)Rondo is with the team for the next four years so that is a positive but if they lose the big three a once prominent Celtics team goes into a rebuilding phase but with a decent young core to work around. On the other hand the big three in Miami have now made it to the NBA Finals the last two years and if they lose this one it will be time for possible big changes in Miami that could include Dwayne Wade, or most likely Chris Bosh. This is the new era of the NBA and we as NBA fans should be ready for Thunder vs. Heat finals for the next four-to-five years. It was nice to have a Celtics championship in my lifetime, and it was well worth it to have a three-year plan last a little longer than it should have.

In the NHL the Kings have been riding a wave of success since the playoffs started. Graced with a top-tier offense and an other-worldly goalie in Jonathan Quick they’ve become the darlings of the most forgotten sport in America, hockey. It’s good for the sport to finally get more recognition. These are the highest rated Cup Finals in years and that is mainly due in part to the Kings success. The Devils are toying with history on the other hand. Winning at home, for the first in the series they were able to bring the Kings lead to 3-to-2 in the best-of-seven series. The last time someone came back from being down in the Stanley Cup Finals 0-3, 1942. That a long ass time and with the all-time greatest goaltender in net for the Devils it is very plausible. That is however beside the point. The Kings are the underdog that’s favored and the wrong team won on Saturday night, in the eyes of most L.A. fans. In actuality this may be the game finally catching up to the Kings, going 11-0 on the road in the playoffs is an astounding feat but at any point your luck can run out.

The worst event on Saturday, Pacquiao vs. Bradley, where both men showed up to fight except the judges didn’t show up to score their cards correctly.  C.J. Ross, Duane Ford and Jerry Roth all very competent judges, seemed to be watching a completely different fight, as stated by Duane Ford in an article from ESPN.

“I thought Bradley gave Pacquiao a boxing lesson “I thought a lot of the rounds were close. Pacquiao missed a lot of punches and I thought he was throwing wildly.”

Pacquiao did throw more punches at Bradley, 493 to be exact; Bradley threw 390, Pacquiao landed 190-punches with a +82 advantage in power punches, Bradley landed 109. Even if Pacquiao was throwing more wild punches he made sure to land 84 more punches than Bradley, a possible 82 of those being power punches. Pac Man danced around the ring with a smile the whole night landing powerful combinations and smirking whenever Bradley landed a decent punch. He was laughing the whole time because he knew he was eons-better than his opponent, the judges seemed to see this as cocky, the crowd as confidence. Either way Pacquiao stayed humble after the fight and seemed too learn a valuable lesson. Don’t make judges wait 20-minutes before the fight starts so you can warm up you calves and watch the Celtics game.

There were dark forces in sports at work on Saturday night maybe for the right reason, maybe for the wrong reasons, fan bases were shaken and some pushed to new levels of hope. Whatever it may have been in the air on Saturday it rode in on the winds of change.

Cameron Heffernan is a writer and co-Editor-in-Chief for Hefferbrew. Visit us at Hefferbrew.tumblr.com or Hefferbrew.wordpress.com. Feel free to tell us what you think or give us material for a possible mail bag at cameronheffern@yahoo.com.