Jr. Gets the Trophy, But We’re All Winners- by Dustin Brewer

After the dominating victory by Dale Earnhardt Jr. at the Michigan International Speedway, Dustin unleashes his inner NASCAR knowledge and explains why it seems to be so important for all parties involved. 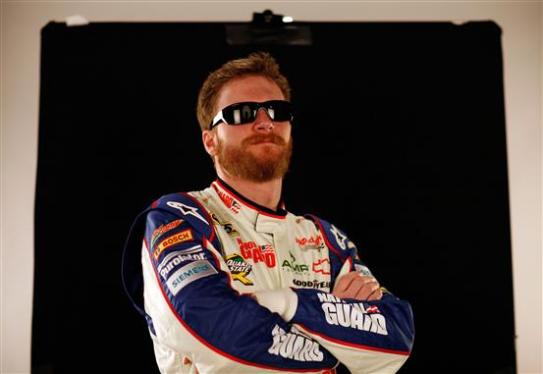 Confession time; I am a pretty knowledgeable NASCAR fan. I grew up around it, my father a lifelong fan of the sport, and over time, just came to accept it and embrace the level of competition it showcased. I even wrote an article on last season’s Chase. And since my dad was a longtime Dale Earnhardt fan, it only made sense that I would cheer on his son, Dale Earnhardt Jr.

Now, it’s no secret, even to non-NASCAR fans, that Dale Jr. is the most popular driver in the sport and has been for years. Jr. has an interesting fan base, not only does he have his own fans, but he also inherited the fans of his father, a pressure only made greater after the elder Earnhardt’s untimely passing. The odd part of this is that for the last four years, Jr. has failed to be considered a viable contender for the Sprint Cup trophy or even win a single race. Yet, as the disappointments mounted, the fans endured on, never wavering in their support.

That drought ended this past weekend, as Jr. proved victorious at the Michigan International Speedway, finally snapping his 143 race winless streak. Jr. not only won, but won in dominating fashion in the ‘Dark Knight Rises’ Chevy Impala over Tony Stewart in the Burger King Chevy Impala (by the way, is there a better partnership than T-Stew and Burger King? Maybe Mark Martin when he drove the Viagra car, maybe.) In a random occurrence, he snapped the streak exactly four years to the day of his last win, which came at…yep, you guessed it; Michigan International Speedway.

The win marks a complete change in fortunes for Jr. as he went from contender to people wondering if he could ever win another race again and now back to contender as his victory has him 2nd in the Sprint Cup standings.

Coupled with the tragedy of losing his father to a horrific accident in the 2001 Daytona 500, the constant pressure and scrutiny on Jr. to win could’ve had many different effects on him:

As surprising as it may be, this whole time, Jr. has gone with D. He has played the part of the sports’ most popular driver to a tee. This is one of the reasons that he has endeared himself to so many over the years, me included. He’s been in music videos for Nickelback and 3 Doors Down (who I’m told are bands that are popular in some parts,) had his own spot featured on MTV’s Cribs and even has his own candy bar, called, no joke “Big Mo.” Clearly, he doesn’t let the pressure get to him, and if it does, he’s not going to show it.

He has become his own brand, I can’t tell you the countless things emblazoned with the name Earnhardt scattered around my house from Father’s Days, birthdays and Christmas’ passed.

While Jr. is enjoying the fruits of his victory and resurgence, the real winner is NASCAR itself. It’s no secret that sports prosper with the marquee names achieving success. The NFL does better when teams like the Packers, Cowboys and Raiders are relevant and thriving, as does the NBA with the Lakers and Celtics. But NASCAR is far more widespread, Jr. is not just representing a city, he has fans throughout the entire country and is the face of a sport that features a driver who won 5 championships in a row, a driver who does backflips after victories and is known for its’ spectacular accidents, including one even called “the Big One” at Talladega Motor Speedway.

NASCAR benefits most from this victory because for the most part, this season has been a bit of a disappointment to fans thus far. In 15 races this year, only 14 caution flags have waved. The excitement is gone, races are won well before the checkered flag waves and the photo-finishes have been few and far between. This has been compounded by the season-long struggles for some of the marquee names in the sport. Carl Edwards has yet to win, after two years of contending for the Cup up until the last lap of the last race. Kyle Busch, the sports’ proverbial lightning rod, who dazzles with skill on the track, only to irritate others with his controversial statements and attitudes, has struggled the last few weeks, and no villain is really bad unless they’re achieving some measure of success with their nefarious ways. Even Jeff Gordon, who, as a Jr. fan I am required to say, sucks, has had his struggles this season, not finding victory lane yet and beginning to hear rumblings that his career may be on a downturn. Jr.’s win Sunday, not only lifted the crowd to a roar and the fans across the country, but acted as a veil on all the other criticisms the sport has faced this year. As long as Jr. can contend week in and week out, and ultimately, compete for the Sprint Cup in the last 10 races, then NASCAR doesn’t have to worry about all the other questions for just a little while longer, maybe it gives them a chance to look into ways to address these complaints, or maybe it just gives them a little time to enjoy their favorite son’s success a little more.

Dustin Brewer is a writer and co-editor-in-chief at hefferbrew.wordpress.com/hefferbrew.tumblr.com. He can currently count off 9 pieces of Earnhardt memorabilia in his line of sight right this moment.

One response to “Jr. Gets the Trophy, But We’re All Winners- by Dustin Brewer”