Movies that suck: Mac and Devin go to High School- By Cameron Heffernan

Last night Cameron found himself bored out of his mind with 1600 Microsoft points and looking for a film to watch, if only to occupy his time. Astonished to find that Snoop Dog and Wiz Khalifa made a film together, his intrigue got the best of him. Leading to 76-minutes of his life he’ll never get back. 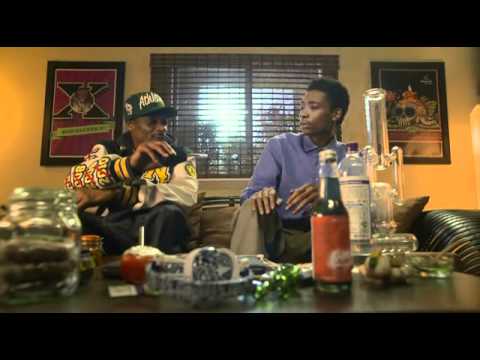 First and foremost it should be known that I know this film is in no way meant to be taken seriously, that Wiz Khalifa and Snoop Dogg threw some cash together, got really baked, told someone to write a script, something like “The New Guy” meets “How High” with a sprinkle of any movie where the “nerd” befriends “the cool kid” and they learn life lessons from one-another, then hire a director, film the piece of crap and, boom, a little extra cash for whatever two already-millionaires may need. The movie at times is almost attempting to be  like “21 Jump Street” but with no action, barely any comedy, Wiz Khalifa in his first acting role, ever, and a talking joint who acts as the narrator. The Joints name you say? Well it’s “Slow Burn”, the actor playing the voice you ask? None other then Mr. Shake ya ass himself, Mystikal.

In ‘Mac and Devin go to High School’ the eloquent Snoop Dogg plays Mac, a full-time pot dealer and 15-year senior at N. Hale High School (Inhale High School, bazing!.) who is forced to partner up with Devin (Whiz Khalifa) in their chemistry class by their new, and sexy substitute teacher, Ms. Huck (Teairra Mari). Devin is upset with this pairing due to the fact that he thinks Mac will only bring him down and he’ll fail the class and subsequently not get accepted to Yale. His acceptance to Yale is pertinent in staying with his, as they say later in the move, “Bitch of a Girlfriend” Ashley (Teni Panosian). Panosian plays the usual harpy girlfriend in these types of movies perfectly, and aside from Mike Epps, who Plays Macs’ Teacher, Mr. Armstrong these two are the only ones doing a decent job of actually making this a film. Otherwise, it’s one giant glorified Wiz Khalifa/Snoop Dogg video, that drags its ass inbetween the few “music videos” featured in this film.

Mac is also attempting to nail his new teacher to which she first dismisses him, and then in a turn of face she promises herself to him if he graduates high school, this then causes Mac to turn a new leaf and half-assedly attempt to become a better person. Now just think about that. I’m one for movie love and all that stuff, but this is a supposed 33-year-old man who has been held back for 15 years. Why would any woman, no matter how cool or hot, ever find that quality attractive, ever? I know one thing, and that’s if I were ever a 15 year super senior, I probably would’ve just dropped out somewhere around year 10, maybe 12. Just saying.

Aside from the porous acting, something that’s accepted from Snoop now, and also the fact that this was Khalifas’ first foyer into film. One thing stands out in this film, the narrator and in between segments they have with Slow Burn. The movie begins and ends with Slow Burn, the talking and philosophical joint, opening with him introducing the characters and ending with him rattling off some bull about living your life “young and wild and free,” you know just like the Khalifa song. The whole movie revolves around songs from Wiz and Snoop about Marijuana and also just about Marijuana in general; another segment with Slow Burn and a talking pot leaf is about the different strains of Marijuana, including Sativa, Indica and a hybrid of the two. While the pot leaf is explaining the positive effects of Mary Jane, he includes something that I don’t believe is a fact at all, he rambles off something which involves the factor that Osama Bin Laden, when caught, was smoking so much reefer that he started slacking and got his ass killed. I don’t know about you but this seems a little, maybe just a little far fetched. I could see Opium maybe slowing him down mentally so much that he’s forgetting to move from safe-house-to-safe-house, but not weed.

In the end everything works out, Mac gets his girl and the Diploma he’s been waiting 15 years for. Devin eventually gets his shit together and gets into Yale, a few other characters get there come up-ins, I forget what or why because at that point I had either fallen asleep or stopped giving a shit. Slow Burn gets his final words in before they roll credits and wrap all the characters futures up in text, Slow Burn goes on to talk about how Marijuana should be legal (it should) and how people shouldn’t give a shit about what other people think, he even uses a Khalifa song about these things to get his point across, as well as the same song Devin uses for his Valedictorian speech, “so what  we get drunk, so what we get high, we’re just having fun, and we don’t care who sees, so what we go out, that’s how it’s supposed to be, living young, and wild, and free.”

It was at this point that I came to attention at what I was watching on the screen and said, “holy shit! This movie was trying to get a point across about how the youth of America, or wherever for that matter, shouldn’t give a crap about their futures and party, that they should be ‘Young and wild and free'” I was flabbergasted, the entire time I was taking this movie as joke and a blatant stoner movie, that wouldn’t have any real points to it, just that anyone can succeed if they just apply themselves. But low and behold the two millionaire stoners feel that you can lead a life just like them if you live ‘young, wild and free’. Again MILLIONAIRE stoners. Anything from this movie should be taken with a grain of salt, and a big grain at that, people like Snoop Dogg and Whiz Khalifa should not be front-runners in the advocacy of legalizing Marijuana nor telling youths how to live their lives. I hate to sound like an old curmudgeon here, but at some point the party does stop, and it’s in your best interest that you’re not that 33-year-old who is just graduating High School. No matter how sweet Snoop Dogg makes it look.

Cameron Heffernan is an Editor at HefferBrew. He realizes that this movie is a joke but the factor that it had message at the end seemed so unnecessary to him he just had to write about it.  He also realizes that Andy Milonakis was in the movie but screw that guy, he was never funny, and was not worth mention.