Cameron takes a look at some of the upcoming features and fun antics available in the upcoming “Little Big Planet Karting” for PlayStation 3. 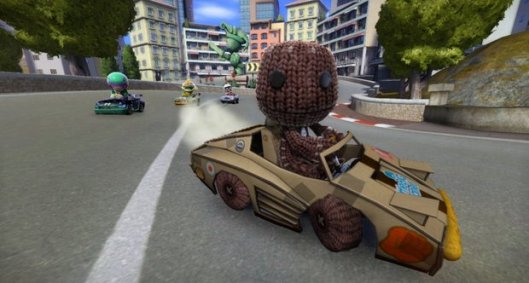 Sackboy is stepping out of the platforming game universe, to step into the kart racing game universe. Expanding into the carting world can be hard with stiff competition like “MarioKart,” and the always classic “Crash Team Racing,” already in the minds of kart-racing game fans everywhere; but with Little Big Planet’s signature style of user-created worlds, ‘Karting’ looks to leave the competition in the dust.

‘Karting’ is scheduled for a Fall release date, and will include full customization on not only Sackboy, as expected, but it will also feature the ability to customize your Kart, and the tracks that you, or the community of over 1,000,000 users, decide to build and race on. Little Big Planet has become synonymous with it’s, not only adherence to family fun, but the idea of letting the user create the environment they would like to play in. ‘Karting’ hopes to bring that usual Little Big Planet feel that fans have come to love, of having full control over the environment that you are playing in as well as full control over the character too.

“Since the launch of LittleBigPlanet, our community has provided incredible support, which can be seen in the more than six million levels and games that have been created and shared online through PlayStation Network, a truly wonderful accomplishment,” said Guy Longworth, Senior Vice President, PlayStation Brand Marketing, SCEA.

“Now, we’re thrilled to bring PlayStation 3 owners the next Play, Create, Share experience, LittleBigPlanet Karting, a brand new competitive karting adventure that is sure to move this genre forward, providing endless entertainment for fans and newcomers, while resonating with every member of the family, young and old.”

‘Karting’ will feature, a regular racing mode, where you and your friends can come together to see who is No. 1 in the ‘Karting’ world. On top of that, it will feature, arena battles, objective-based missions, boss battles, and mini-games. All the features one would want from a karting game. With Little Big Planet Karting though you not only get the customization of the karts, Sackboy and the tracks, but also the ability to craft your own game rules, weapons and tracks that break free from the usual restraints that are created in competition like ‘MarioKart’ and other karting games. Players of ‘Karting’, just like all other Little Big Planet games will be able to share all their creations through the PlayStation Network.

Little Big Planet hit the scene in 2008 and revolutionized the platforming genre. Allowing players to fully customize whatever they please, Little Big Planet brought something new to the table that gamers hadn’t seen before. Prior to it’s release, full-customization in video games was few-and-far-between. With sports games, like “Fight Night” and any WWE game, and pure-PC games, like “Spore,” these were the only places in gaming that you saw the ability to fully customize anything. Those games still had a structure and predetermined goals, whereas LBP let you create your levels, create the purpose for those levels, and also let you customize your character in some of the most creative ways possible, seeing as your chacter is,just a Sackboy.

Little Big Planet 2 expanded upon this idea in 2009 and LBP1 also saw a “Game of The Edition,” released, as well as a PlayStation portable counterpart.

Little Big Planet will also be seeing a PS Vita version soon to be released in the Fall along with the release of ‘Karting’. Detailed in a press release from Sony. Little Big Planet on the PS Vita is said to be just as fun and unique as previous LBP titles, only in the palm of your hand.

“Later this year, LittleBigPlanet will be coming to PlayStation®Vita allowing users to customize Sackboy and the world around you with unique touch and camera create tools that let you play with more freedom that ever before,” said in a press release from Sony. “A miniature development kit in the palm of your hand!”

For more information on Little Big Planet and any thing PlayStation, be sure to check back, and get your daily dose of the HefferBrew. Or visit Sony at www.us.playstation.com.