Movies That Rule: The Expendables 2 – By Cameron Heffernan

Cameron looks at the greatest action movie of all-time, in this installment of Movies That Rule. You hear me!? ALL-TIME! The Expendables 2. 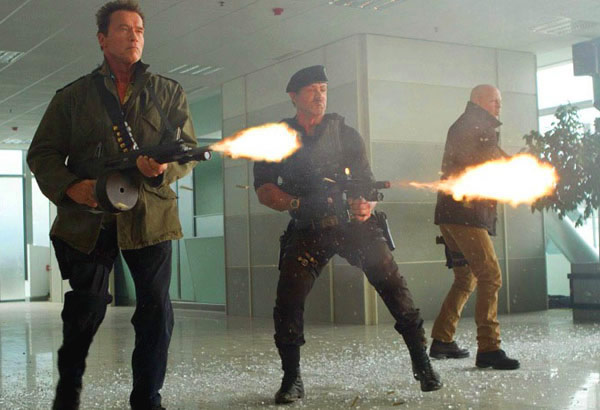 Sylvester Stallone, Arnold Schwarzenegger, Bruce Willis, Jean Claude Van Dam, Chuck Norris, and even more recently, Jason Statham  have all been names synonymous with action films. All these men have killed, in moves per say, millions of bad guys, and they’ve also saved more than 1000 damsels in distress, as well as the fictional universes that their characters exist in. They’ve each done movies with meaning, just as much as their is action, and some have done dramas where there’s little action and all story line and character development. Each one is a testament of a time when testosterone and excess ruled-all.

With “The Expendables 2” these men come together to craft a very divine and special film that hasn’t been seen since things like “Commando,” “Rambo II and III” “Die Hard,” and “Crank I and II.” ‘Expendables 2’ takes everything that “The Expendables” hoped to accomplish, shoots it in the face with a .50-cal.. takes the body, throws that in the same boiling led that the Terminator was dumped in, in “Terminator 2,” then takes the remnants of some of the boiling led, and threw that in the sun with a stand of Superman’s hair and created what should go down in the annals of movie history as the single-greatest-action-film-of-all-time.

I would love to go on-and-on about all the awesome things that happened in this movie, things like:

A helicopter being taken down by an unmanned, and well aimed motorcycle.

A knife being roundhouse kicked into someones heart. Oh yeah, and the knife. It’s like 16-inches long. It’s cray.

A Chicken being thrown out of the back of a truck by Dolph Lundgren. Yeah, you heard me right.

A pair of jumping-spin-kicks from JCVD.

JCVD as one of the best villains ever, a man named, “Vilain.” Get it?

Big guns that kill everything in it’s path.

Jason Statham saying the words, “I now pronounce you man and knife,” before stabbing someone.

Steels chains being used like ‘Whiplash’s’ whips from “Iron Man 2” in an epic final battle.

Oh. Did I say Terry Crews. I did. Well let me say it again.

I would also love to go on a tangent about how, Arnold is the greatest actor of, like, ever. And even though he’s a little hammy, he still knows how to take over a scene and completely dominate the awesomeness factors. Stallone and Willis do their part, as well as JCVD and Chuck Norris. Norris plays, essentially his “Lone Wolf  McQuade Character.” And every-time he comes out it’s to the “The Good, The Bad, and The Ugly,” theme and JCVD plays the usual villain out for world domination, but for some reason, as portrayed by “Mr. Bloodsport” himself, there’s just something more evil and cunning then the usual generic bad guy.

Do yourself a favor and go see this movie as soon as you can. If you love action films with very little story line, and just a whole bunch of gruesome deaths and explosions, and very well anything you could ever imagine. It’s there. Neatly wrapped in wonderful coats, explosions, severed limbs, and skulls on everything.

‘Expendables 2’ is what senseless violence in movies was meant for. Things like the “Saw” franchise, and other examples of brutal gore that borders on snuff film are what take these things to the limits we, sometimes, don’t want to see. Yes, those films stare into the dark part of our psyche, and show us things that could go on in the real world, but with the ‘Expendables 2,’ it’s senseless violence takes you on a journey with your favorite characters, as they kick ass throughout the entire film. There really isn’t much of a story line to this film, someone is running townsfolk near an old abandoned Soviet Nuclear Mine as slaves to dig out secret hidden weapons-grade uranium to sell on the black market and the Expendables have to stop this. Pretty cut and dry, to say the least. What makes it the greatest action film of all-time, is just that. Barley any story line, just point-A-to-point-B and a whole bunch of explosions, deaths and awesomeness in-between.