Are You Ready For Some Football !? Part Deux: Fantasy Style Part I – By Cameron Heffernan

In another edition of “Are You Ready For Some Football,” in preparation for the NFL season Cameron shares his top-5 fantasy picks for quarterback, running-back, wide-receiver, and tight-end in part one. He’s won a fantasy football championship before. So trust him.

Hey everyone! It’s the most wonderful time of the year! No. Not Christmas, or whatever specific holiday you may celebrate. I’m talking about fantasy football. Many fools have already drafted their leagues, and with all the injuries that pile up throughout the preseason, and the DUIs, some players just can’t seem to keep away from, you drafted early and that was foolish. So to you I wish nothing but luck. You’re gonna need it. Those who have yet to draft their league. Listen up. I’ve got some good advice for you. Advice you should adhere to and not question at all. I’ve won a fantasy championship before, so I feel I know what I’m talking about here. All I recommend is that you take my word for it.

1. Aaron Rodgers – He’s the best. Plain and simple. He may not shatter single-season yards records like Brees, or single-season touchdown records like Brady, but he will throw for nothing under 250-yards, two passing touchdowns, at least one rushing tochdown, as well as rushing for 40 to 50-yards. He’s an unstoppable fantasy points machine. Barring any injuries.

2. Drew Brees – Even with all the ‘Bounty Gate’ shenanigans that occurred over this past season, that shouldn’t flap the unflappable Drew Brees . He has a cannon for an arm and accuracy more deadly than Lee Harvey Oswald. JFK jokes are alright now. right?

3. Tom Brady – He is a quarterback android. With the addition of Brandon Lloyd he will only be more unstoppable. If that’s even possible.

4. Cam Newton/Matthew Stafford – “Young Guns III” right here. I don’t know if they made a ‘Young Guns III’ but we’re just going to pretend like they didn’t if the did. If only for the sake of this article. Maybe it’ll be a movies that suck, if they did. Anyways, one is by air and the other is by land. Stafford has Megatron (Calvin Johnson) who whenever he may feel he’s in danger, he can just dump it to ‘Tron’ and he’ll do the rest. With Newton, he’s like Vick 2.0, but without all the “you-killed-dogs-in-brutal-manners-so-here’s-injury-Karma-for-you” Karma. They’re both win/win situations, and are especially vital in any keeper leagues.

5. Eli Manning – He was the Super Bowl MVP last year and he seems to be finally coming around to not throwing the ball to the other team. It doesn’t really matter who his receivers are because his accuracy and power are starting to look like old-Peyton but without the giant forehead. With Victor Cruz as No. 1 too, everything will be fine. You can salsa-dance your way to the top of you fantasy league.

2. LeSean McCoy/Ray Rice – Both are speeding bullets with finesse, they both have decent receiving skills and when their quarterbacks are either injured or wilting in the limelight the entire offense rest on their shoulders.

3. Darren McFadden/Maurice Jones-Drew(If he gets paid) – These two have the same case as the two above them. The only difference is when will Jones-Drew decide to settle with Jacksonville and end his contract stand-off that’s been going on for the entire off-season. The Oakland Raiders at some point will have to dump the entirety of their offense on McFadden. With the interception machine that is Carson Palmer and the “always seems to find his way out of playing but still finds a team that will pay him” Matt Leinart the Raiders have developed a QB depth chart that reads like ghost stories of college success that dwindled by exposure from professional defenses.

4. Jamaal Charles(If he stays healthy) – Bounce-back year brewing for Charles. he was off to a great start last year. In one-and-a-half games last season he had 12-carries for 83-yards and a destroyed knee. Bounce-back year I tell you.

5. Fred Jackson(Same as above) – Another RB that started out great but was stricken by a brutal injury. So is the way of the football. Jackson is another case that when all else fails, the entire Buffalo Bills offense will rest on this mans shoulders. I’ll go on a limb here and say he’s gonna play all 16 games and at least average 90-yards combined a game and 2-TDs. I am also a Buffalo Bills fan and this pick is solely based on my Homeristic ideals.

If you play fantasy football and you’re reading this, you already know the freaks of nature that Johnson and Fitzgerald are. With Johnson, he seemed to not be able to stay healthy at all last season, missing nine games due to a hamstring injury that plagued him the entire season. If his Hamstring stays solid this year he is a No. 1 receiver that will be nothing but a great addition to your team. If his hammy doesn’t stay solid. DeSean Jackson is your man. With Jackson you get a whole new man fresh off a season that he admittedly did not give his all in. DeSean is ready for a break-out season that could see him finally go over the middle on defenders, opening up wide open lanes down the center of the field and into the end-zone. Which means mad points for you and happy Eagles fans everywhere, which could also help the crime rate in the greater Philadelphia area.

2. Roddy White/Julio Jones vs. Greg Jennings/Jordy Nelson – This is totally based around the idea that either of these guys could end up being the No.1 for deep-ball-throwing savants. With White/Jones and Jennings/Nelson, both will see their fair share of yardage and touchdowns but which one will create more of those opportunities for themselves. With White you get quickness, agility and hands made of glue. With Julio Jones you get those things and a 6’3″, 225-lb frame that can go over-top of a defender like a young Randy Moss. In the battle of Nelson v. Jennings you get Nelson who is a mixture of a tight-ends body, but the finesse of a wide receiver almost making him an enigma on the field. On the other hand, with Jennings you get a solid player. He’ll never really go nuts in a game, like, 250-yards and 4-TDs, but, you will get a consistent 90 to 110-yards a game and a TD every other game. Either one is a solid decision but any of them could end up being the thing that puts you over the edge of glory.

3. Wes Welker – It is time to start taking this little man very seriously. Last year he had 12.9-yards per reception, 1,569-yards receiving, nine touchdowns, and a 99-yard reception for a TD that he pretty much ran the entirety for. Check it out.

4. Mike Wallace/Antonio Brown –  As long as Ben Roethlisberger stays healthy both these receivers will be absolutely dominant. ‘Big Ben’ knows only one style of football, and that’s, “Huck it, Chuck it, Football!” Meaning both receivers will catch deep balls for lots of yards and touchdowns. The Value of Brown as a kick-returner can also not be understated.

Guys throw footballs at them. They then in-turn, catch the footballs. Then each one will either, get yards, fumble the ball, get a touchdown, get a touchdown and salsa dance, and then you get points. Get it ? good. A.J. Green is a big standout here. But who knows if Carson Palmer 2.0 (Andy Dalton) will repeat the same success as last year. Percy Harvin’s running ability is another thing that can’t be understated, he is the ultimate in RB/WR technology.

I don’t plan on writing much for this. Just two things. 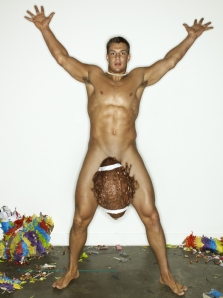 He may not like clothes, or let alone shirts. Be he sure as shit loves touchdowns.

2. Jimmy Graham – He’s “Mister Yo Soy Fiesta” light. The same amount of talent that Gronkowski possesses but just a tad-bit lesser in the awesomeness department.

3. Antonio Gates – He is one-half of the most prolific TE/QB tandem ever. Gates had some injury issues last season, but still had 778-yards and seven touchdowns. In a league that is leaning towards pass-first-offenses, the ‘OG’ super-tight-end that is Gates has been a solid fantasy staple for the past 10-years.

4. Vernon Davis – Davis is the most secure blanket in a receiving core built around security-blanket-type receivers. Davis came on late last season but still finished the season with solid with 792-yards receiving and six touchdowns. Davis will be the go-to-guy in San Francisco once Randy Moss starts garnering double-teams as well as Michael Crabtree and new addition, Mario Manningham.

5. Jermichael Finley/Aaron Hernandez – Finley is just as solid as the three players above him, but with a QB like Aaron Rodgers, who definitely shares the love, Finley isn’t as go-to as the rest of those characters. Hernandez on the other hand comes form the same situation but with a QB, like Tom Brady, who seems to like his tight-ends more than his normal receivers that aren’t named Wes Welker, your looking at a pretty solid situation.

That’s it for Part one of “Are You Ready For Some Football” fantasy edition. Check back tomorrow for part two. Where I’ll cover kickers, defenses and possible sleepers pooled from rookies and nobodies sitting on the bench.