Dustin breaks out his NASCAR knowledge to dissect the contenders in this year’s Chase for the Sprint Cup.

It is that glorious time of year again, the time I wish I could grow an epic mullet and make the pilgrimage down to Homestead Miami Speedway because the 2012 Chase for the NASCAR Sprint Cup is upon us.

After 26 of the 36 races in the season have been run, the points standing are re-seeded and the top 12 find themselves in contention for the Cup over the last 10 races.

So now without further hesitation, let’s take a look at the 12 drivers competing for your hearts and the trophy this year. (Based on Current Points Standings)

12. Jeff Gordon- Goddamn him. Looking at possibly missing the Chase for only the second time ever last weekend, Gordon managed to pull off a miraculous second-place finish to unseat Kyle Busch from the 12th seed, locking his place in this year’s playoffs. Gordon definitely has the ‘been-there, done-that’ advantage and the fact that he resembles a weasel more and more with each year has to count for something. Keep an eye on him, now that he’s in the Chase, he can definitely make it interesting.

11. Kasey Kahne- In just his first year driving for Hendrick Motorsports, Khane enjoyed 2 wins and a spot in the Chase. It’s certainly a pleasant surprise that Khane finds himself in the Chase and while it’s highly unlikely that Kahne will win it this year, his immediate contention should not go unnoticed because Kahne will likely find himself in the hunt for years to come. Side note: If cuteness was a determining factor, this guy is more dominant than Jimmie Johnson, just look at that boyish smile.)

10. Martin Truex Jr- Am I shocked that Truex made it into the Chase? Yes. Do I think he has a chance to win the Sprint Cup this year? No. Do his musical NAPA commercials have anything to do with my dismissal of him as a contender? Yes.

9. Kevin Harvick- I love pointing out that Harvick looks like a certain conspiracy theorist character from “King of the Hill” and Cameron was more than ecstatic to remind me that while speaking of him, announcers have actually said “There goes Kevin Harvick, being all Kevin Harvick-y.” He has a great chance of winning this season simply because his specialty is flying under the radar until crunch time and then just outdriving the competition with some crafty, dare-I-say Kevin Harvick-y moves. Look for him to stay in contention down to the wire.

8. Matt Kenseth- He won the Daytona 500 this year and is a previous Cup champion. Many fans simply overlook Kenseth because he’s not as flashy as some or as embroiled in controversy as others. He simply shows up week-in and week-out and most of the time, he delivers. He could very likely win the Cup this year by finishing the most consistent of the drivers in the mix. With only one win this year, Kenseth got into the Chase by finishing in the Top 10 16 of the 26 races and in the Top 5 in 10 of them. Simply put, don’t sleep on Kenseth or he’ll shock you by hoisting the trophy at the end of it all.

7. Dale Earnhardt Jr- As mentioned in previous articles, my dad is a huge NASCAR fan and my house doubles as a shrine to all things Earnhardt. Jr. being in the Chase is the NASCAR equivalent of unicorns in terms of how magical it can be to the sport’s success. This season has been a redemption run of sorts for Earnhardt as he’s been the most consistent driver of the year, even ending a winless streak that lasted more than 3 and a half years. Recent interviews have suggested that this is an Earnhardt more focused, determined and hungry than ever before. The perfect cap to this season would be Jr. hoisting the trophy in Miami while grown men everywhere weep with pride.*

6. Clint Bowyer- Wait, Clint Bowyer won two races this season? He’s also finished in the Top 10 15 times? Solid year and all, Bowyer has never finished higher than 3rd in the points standings, and even that was in 2007. I’m almost certain even Bowyer fans are skeptical of his chances but hey, that’s the magic of NASCAR right?

5. Greg Biffle- The Biffster has never won a championship and is known for wildly erratic years, often following weeks of success with head-scratchingly bad luck that keeps him from dominating the sport like his talent suggests he could. With 2 wins, 10 Top 5 finishes and 15 Top 10s, Biffle certainly has the ability to stand out in a crowd, plus, being able to call your Sprint Cup champion The Biffster just sweetens the deal.

4. Brad Keselowski- Let’s face it, Kyle Busch had a bit of a dismal season and missed the Chase. This should be disappointing because Busch is one of the most entertaining drivers in the sport with his brash attitude and reckless driving style, but thankfully, there’s Brad K to fill the void. A young driver with immense talent (see: won two races with a broken foot last season) all he needs is a few strong showings to open the Chase and hopefully unleash a flurry of cockiness on the world.

3. Tony Stewart- He’s an overweight, loud, obnoxious race-winning machine. He defies physics with his endurance for his size and is also the reigning Sprint Cup Champion so his chances are sky-high to repeat. He had 3 wins this season and still, Cameron was almost positive he had missed the Chase this year. This plays into his hand as Stewart works better as a sleeper than a front-runner, as long as attention is focused on guys like Johnson and Earnhardt, Stewart could easily sneak past all of them for another title. 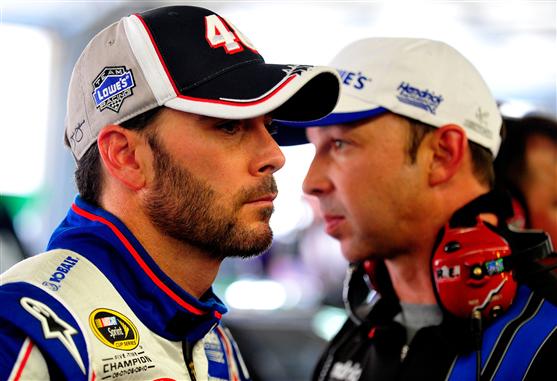 2. Jimmie Johnson- It should be noted that all four drivers for Hendrick Motorsports (Gordon, Khane, Earnhardt and Johnson) so statistically, there’s a 1 in 3 chance that the champion this season will drive for Hendrick. Take into consideration that Johnson won 5 of these things in a row, it’s far more logical for him to win his sixth than any other scenario simply because he and crew-chief Chad Knauss have been in this situation so many times before. The smart bet is on JJ to bring home number six at the end of the year.

1. Denny Hamlin- Sources tell me that LeBron finally won an NBA title this year, so with that in mind, it’s highly acceptable for Hamlin to become the new regular-season stud but playoff choke artist. He won four races this season, the most this year, but still in all his Chase appearances, his best finish is 4th in 2006. Every year experts pick him to emerge and finally break out and every year, he looks strong in the regular season only to disappoint and disappear in the pressure of the Chase. Until he wins a title, it’s unlikely he’ll be a front runner anytime soon.

There you have it, place your bets accordingly and get pumped for the best sports action not associated with the NFL for the next ten weeks.