It’s that time again, the weekly top-five of the worst the NFL has to offer.

Last nights Monday Night Football is the reason why I wait till Tuesday to do this list. Originally, we had a toss up between Michael Vick, Andrew Luck and Alex Smith. Then Mr. Phillip Rivers, like a whirlwind of suck, came out of nowhere last night and took the number one spot. He looked primed to keep himself out of the “Craptastic Power Rankings”, but then the second half happened.

1. Phillip Rivers – In the first half of last nights game, Rivers had a stat line that looked like this, 12 for 18 for 144 yards with two touchdowns and an interception. His interception was bad but it didn’t turn into any points for the Broncos, so it wasn’t that bad. Rivers and the Chargers went into the locker room with a 24-0 lead and a pick-six off of Peyton Manning to boot.

The second half though, didn’t go as well as the first, as you’ve all probably figured out by now.

Rivers went 13 of 33 for 98 yards no touchdowns and three interceptions, one being a pick six that put the Broncos up 35-24. Rivers also had a fumble that Tony Carter recovered and ran back 65 yards to put the Broncos within 10. Each of Rivers’s turnovers led to points and he sealed up the game with a horrible to pick six. One of the greatest comebacks in football history and especially Monday Night Football history wasn’t because a defensive collapse or anything like that, no. Rivers himself threw his team out of this game with reckless intent. He also had a fumble that wrapped up the game, but at that point it looked like Rivers had checked out and gone to whatever fantasy world he escapes to on the sidelines when in the face of adversity, where he is the greatest quarterback of all time and no one is able to intercept his super-throwing ability.

I have subscribed to the idea of Phillip Rivers being an above average quarterback, but that’s it. Him and Tony Romo are in the same boat; and this boat is springing holes all over the place as they both try to scramble and not drown with the sinking ship they call an offenses.

We also got to see the ever so classic Rivers frustrated face, which is the best. 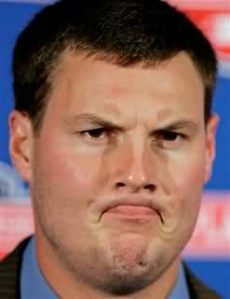 2. Alex Smith – I’m so glad he had this game. I mean, I’m not because I don’t like seeing the Giants win anything, but that’s besides the point. I wasn’t writing when Alex Smith was in his prime “suck” years, had I been, he probably would’ve been riding the top of this list to craptastic glory every week. This was an old-school performance from Mr. Smith. 19 of 30, 200 yards and three, count them, one, two, three interceptions. I would love to make excuses about how balls were tipped and this-and-that, but that’s not the case. Smith was forcing balls into double coverage all day and he’s lucky he only walked away with three interceptions. Smith had absolutely no business being on the field on Sunday and I’m so glad that he had a regress to the mean game. I don’t know about you, but I was tired of defending Alex Smith as a top-tier quarterback, haphazardly saying things like, “‘he can throw down field,’ ‘he’s only thrown one interception all year’ and ‘he’s the perfect game manager’.” Smith is not a good quarterback, he is a good game manager, but not a good quarterback. Alex Smith has done a good job so far, but his shaky performance against a shotty Giants secondary leads me to believe that he may never be able to get the job done for the Niners, in terms of winning the Super Bowl, and that maybe they should have thrown the kitchen sink at Peyton Manning.

3. Andrew Luck – Aside from the fact that he got his ass handed to him by the pathetic Jets, he also screwed my fantasy team, so my view may be a little skewed. Luck looked stale the entire day. The Colts were able to get in the red zone twice and both turned out zero points. One of Luck’s interceptions wasn’t his fault and the other was. The entire game, Luck just looked outmatched, which I didn’t quite understand. Look, I understand that he’s a rookie and everything, but this is supposed to be the most NFL ready quarterback since Peyton Manning and I understand that Manning had a horrible first year in the NFL, but, he couldn’t stomp all over the Jets? Really? The Jets!? I subbed him in in my fantasy league for Tom Brady, you know, because the Jets have looked awful all year and the Seahawks look semi-decent. Brady had himself a game, over 300 yards passing, two touchdowns, two interceptions, but still he finished with 20 fantasy points. Luck and his 280 yards and two interceptions as well a fumble lost netted me a cool seven points. You hear that, seven. I lost to my girlfriend in fantasy football because of this so called “most NFL ready quarterback” ever. Stupid dick.

4. Michael Vick – He didn’t really throw his team out of this one, granted he had two interceptions but neither turned into points for the opposing team. I think what nets him a No. 4 spot is him going back for a solid 21 yards on sacks in overtime. I know what you’re thinking, “sacks aren’t entirely his fault, things like that rest more on the offensive line.” Well when you scramble backwards to your own four-yard-line then get rocked by Nick Fairley and Kyle Vanden Bosch, you may have just a little bit to do with that.

Today, the Eagles fired their defensive coordinator Juan Castillo, some may have seen this as a necessity, which I wholeheartedly agree is true. But, when does Andy Reid get the ax? When do you pull Vick? Neither is working, Vick is a viable fantasy option, but this isn’t fantasy football, this is real football, where turnovers cost you the game. Vick has accounted for 11 of the Eagles 15 total turnovers and Andy Reid hasn’t changed his coaching scheme in the 13 years he’s been with the Eagles. Don’t you think it’s time for more than a change then firing your “still working on it” defensive coordinator.

5. Kevin Kolb/John Skelton – Against a defense that gave up a 300 yard and three touchdown performance to Alex Smith the week before, the Cardinals quarterbacks had lines that looked like this.

Honorable Mentions – The Steelers defense, Jamaal Charles, Brady Quinn, The Eagles in general, Tom Brady, The Patriots secondary, The Bengals everything, The Niners defense, Frank Gore, Mark Sanchez (look I don’t care if he lucked into two touchdowns, he sucks.), Quentin Jammer, Andy Dalton, Ryan Fitzpatrick, Christian Ponder, and Norv Turner (how is he not fired like last year?).

Cameron Heffernan is co-creator of HefferBrew and is looking to just put this football week behind him. This week was a crazy mix of emotions I never want to experience, like ever again. Disagree with the rankings? Complain to Cameron on Twitter at @karateparty1.