Utterly Fascinating: “You Can’t Always Get What You Want…” – By Sam Accardo

Sam goes over the heartbreaking loss to a scrappy Phoenix Suns team that managed to put it to the Lakers and make it that much harder to salvage this current season. And as much as Phoenix deserves credit for staying in and winning that game, the Lakers threw that game away and snatched defeat in the jaws of victory. Read on and see how Sam makes light of a dismal performance, yet still manages to keep his credibility as an analyst and not a fan in denial. 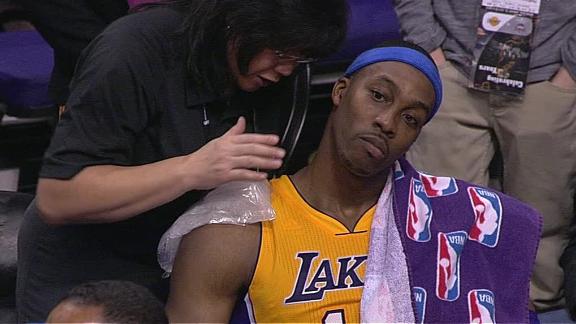 Let’s face it, the Lakers lost that game; the Suns didn’t win it. But give credit to Michael Beasley for dropping 27 points off the bench (who by the way is averaging 10.5 points a game this season). But at the end of the day, letting a player go off like that is on the Lakers. They should have adjusted to his offense and at least made it harder for him to get position. The Lakers have shown they can play defense. You can’t deny the fact that the win against Oklahoma City was due to the Lakers’ defense (and Russell Westbrook having a bad night), but in the final 12 minutes of the game, the momentum shifted to Phoenix and just like the Juggernaut, the Suns would not be stopped.

But consider this, it’s the first game of a 7 game road trip and the Lakers played their second game in 2 nights. And when you consider that Dwight Howard, defensive captain, went out in the last 6 minutes (damn you labrum!), it’s hard not to see how the paint was much easier for the Suns to score in. But the problem is the Lakers are pretty much playing must-win games for the rest of the season. I don’t care how hard it is to guard on the second night of a back to back game against a scrappy team that has some confidence and momentum in the final minutes. The Lakers have to win, especially when they were up by as much as 13 points.

That’s something that always fascinates me about the Lakers. They can’t close out games. They have ALWAYS let a team back in the game after taking a substantial lead. Whether it’s the 3rd quarter or the 1st, the Lakers will always let teams back in. Now obviously that has something to do with the fact that you can play with a little comfort. I mean, when you’re up 13 the only thing you should do is guard the perimeter and make sure that they take contested shots. But basketball isn’t about every possession. It’s about stringing them together. And in the NBA, momentum means everything. The Lakers played great and looked like they could easily win until the 4th quarter. Then the momentum shifted and the Lakers couldn’t do anything about it.

But here’s what both scared and pissed me off the most last night: Kobe played hero ball again. First, let me say I am a big Kobe Bryant fan. As a Lakers fan, how can you not be? He can make some of the toughest shots in the game and is one of the greatest scorers in the game. But that can’t be the identity of Kobe with this Lakers team. I know how sports analysts and voices on the radio love to say that offensive touches shouldn’t result in better defense, but it does. When you’re feeling good, you want to go the extra effort. Think about it like this: when you come home from work and it’s been a long day of people yelling at you for no good reason and putting out fires left and right that you didn’t start, what’s the first thing you want to do? You want to go home and crack open a cold beer and start watching some TV. You don’t want to go home and do the laundry or clean the dirty dishes from breakfast. So when the Lakers just stand and watch Kobe go 1 on 2 and still jack up a low-percentage shot only to have it miss and make the players scramble for a rebound so they have an opportunity to pass it back to Kobe and let him score again, they’re not going to want to get back on defense. That’s just how it works. As a Lakers fan it’s truly frustrating for me to watch it happen, but it does.

But let me put the silver-lining on this loss. And it goes back to the title that any Rolling Stones fan probably picked up on pretty quickly. The line goes: You can’t always get what you want / But if you try sometimes / You just might find / You get what you need. How does that relate? Well here’s what I hope the Lakers take away from the devastating loss in Phoenix. “We have to stick to our identity.” What was the one thing that the Lakers had yet to show on offense? An identity. Under Mike Brown (anyone still remember that guy?) the Lakers looked slow and confused. Under Mike D’Antoni the Lakers looked frustrated and stagnant as Kobe got the lion’s share of the ball and it bled over to defense. As of recently however, with Kobe passing the ball, the Lakers looked happy. They were playing like a team, not only on offense but on defense as well, and they were actually winning games. So as far as I’m concerned, this is the first gut-check for the Lakers with an identity that I hope they keep for the rest of the season. They can look at this game and they can clearly see where the wheels fell off the wagon and how reverting back to old their form is not at all the answer for closing out a game. Or the players can get angry and the locker room can get awkward all over again while the Lakers work on beating their last losing streak.

Sam Accardo is a writer for Hefferbrew. He really wishes he could write about how awesome the Lakers are and how King James and KD can suck it, but the Lakers are currently doing the sucking. But when he heard that Rolling Stones song come on the radio on the way home, it made him feel a little better amidst his girlfriend talking trash about his Lakers in the passenger seat. Follow him @samcar455 and follow @Hefferbrew on twitter and facebook for Utterly Fascinating updates on the Lakers and sports in general.