The beginning of the baseball season marks a new power rankings list for the only big league fan at this fine establishment. 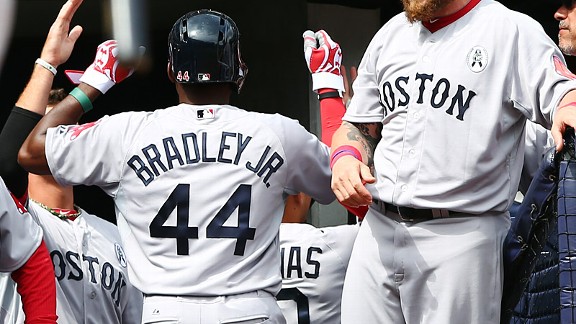 Baseball is back, and  as a Red Sox fan, better than ever. Well, until last night when Joel Hanrahan blew his first save of the season – reminding us of the days of yesteryear – in the top of the ninth to the Orioles. Other then that though, the emergence of top-quality youthful stars like Jackie Bradley Jr. and Nick Tepesch, along with the big-time play of Bryce Harper and Justin Upton, baseball is looking to have one of it’s more interesting seasons to date. Oh, and it’s a tale of two cities with the two L.A. teams, more on that later.

Last year, around this same time, the Red Sox were 1-5 and looking like one of the worst teams to ever play the game of baseball. This year, they’re 5-3, with a run differential of +16, the greatest rookie to ever play the game, Jackie “M-F’n” Bradley Jr., Clay Buchholz is coming into Ace-hood (2-0, 0.64 ERA) and Jon Lester is returning to form (2-0, 1.50 ERA). It’s earl in the season. All us Sox fans know this. You know what, though, just let us have this one, ya know? I mean, at least we’re off to a good start? unlike this next team…

2. There Are No Angels In The Outfield; Only Sadness:

Josh Hamilton is off to a horrid start (4 for 32, four RBIs (two sac-RBIs), two doubles, and a whopping .219 slugging percentage. We saw that last year from Albert Puljos, who went 0-for-April last year. Then, there’s the case of, where the hell is Mike Trout. Trout is batting .278, with zero homers, four runs scored, three doubles, a triple, 10 strikeouts, and one RBI. The Angels have no pitching – Jared Weaver is lost with a fractured elbow and C.J. Wilson is sitting at a 5.25 ERA. There batting should wake up soon enough though, but hopefully not like it did last year. The Angels have way too much talent to not succeed, although if they don’t pick it up soon, any success they may have, may be too little, too late. Like last year.

Again, I know it’s early. Don’t tell that to the Oakland Athletics though. Sitting at 7-2 with a +26 run differential, the A’s are looking just as good as they did when they captured the AL West Division title last year, in the final game of the year, against divisional foe, the Texas Rangers. They’re first in runs scored (28), fifth in batting average (.279), second in on-base percentage (.356), and third in slugging percentage (.503). Offensively, they’re a Juggernaut. On defense, they’re second in ERA (3.11) and they’re tenth in fielding percentage in the AL. I pose you this question though. Can you name anyone on this team not named Coco Crisp? I thought not. I can, and that’s only the ex-Sox players, Josh Reddick, Jed Lowrie, Brandon Moss, and the aforementioned, Crisp. You know, only the meat of their lineup since last year.

4. The Dodgers $200 Million Plan Is Coming Together:

The Dodgers traded for over $160 million dollars in payroll with the acquisitions of Hanley Ramirez from the Marlins and Adrian Gonzalez and Carl Crawford from the Red Sox. Then they dumped a ton of money into the lap of Zack Greinke and everyone in the greater Los Angeles area rejoiced, as their precious Dodgers were finally trying to make big boy moves like all the other legendary franchises. The Dodgers sit at 5-3, one game behind the Giants and the Diamondbacks, but again, it’s early. Matt Kemp seems to have caught himself “Angels disease”. Kemp has gone 5 for 30 with no homers, four runs scored and two – yes two, you’re reading that correctly – RBIs. If the Dodgers are to continue their winning ways, the heart of their lineup, Kemp, has to be better.

5. One Away From Perfection:

Yu Darvish was one out away from a perfect game in his second start of the season, April 2, at Houston. With two outs in the bottom of the ninth, Marwin Gonzalez stepped up to the plate and hacked at the first pitch he saw, a fastball, high, he knocked it for a bloop-single up the middle. Darvish struck out 14 and made the Houston Astros look silly.  The moment Darvish realized that he had history slip away was one for the ages. Never, in all my years of watching sports have i ever seen someone handle disappointment so gracefully.

Cameron Heffernan is a baseball enthusiast and with all his heart hopes the Sox can keep it up. If they can’t then he’s checked out on sports till the NBA Finals. He’s a Celtics fan too, but he’s excepted that first-round-exit fate. contact him on Twitter at @karateparty1 and be sure to follow the blog, comment on whatever and check out our facebook.