The Los Angeles Lakers’ finish to the season was a roller coaster ride to the very end of the last second in Overtime. Kobe Bryant is in recovery for 6 to 9 months to let his torn Achilles tendon heal. The Lakers ralled past San Antonio in Staples on Sunday. And then after that the Lakers got into 7th seed to face San Antonio in the first round by defeating the Houston Rockets after a crazy buzzer-beater by Chandler Parsons to force Overtime. The Lakers will struggle mightily without Kobe Bryant, but the Lakers are very much so a threat in the playoffs. 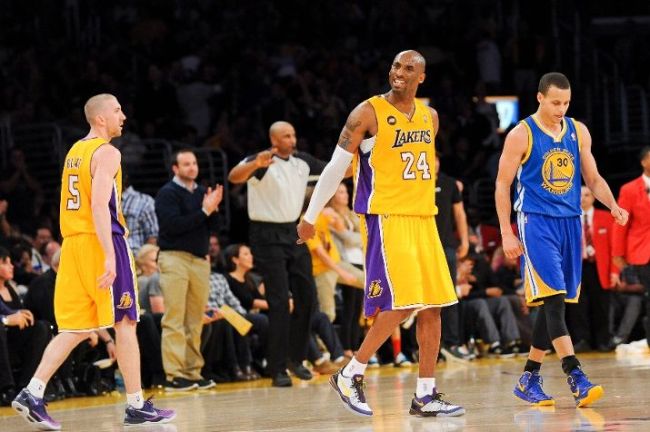 Writing these articles has been awesome. I love being able to channel my thoughts into analysis that I stand behind as the season goes on. But I can honestly say I never thought I would have to talk about what the Lakers will do in Kobe Bryant’s absence for the playoffs. It’s a thought that every Lakers fan feared and never thought was true. And on Friday night, the Lakers’ fans prayed that it wasn’t what they feared. Kobe Bryant tore his Achilles tendon when running towards the basket from the top-left of the key. He was fouled on the play according to officials (looks like a 50/50 reach-in call to me) and after a timeout, made 2 free throws on one leg to keep the Lakers alive down the stretch as they battled the Warriors of Golden State for a victory.

Every analyst, fan, and blogger has an opinion on who’s to blame for Bryant’s injury. I’m here to tell you, if anyone is to blame for Bryant’s Achilles being torn, it’s Kobe. Do you think Mike D’Antoni was all for letting one of his players play for over 40 minutes in consecutive games? I mean, sure he’s Kobe Bryant, but earlier in the season D’Antoni talked of limiting his minutes. Remember the disputes where D’Antoni would try and get Kobe out, but Kobe would literally, on live television, wave off the player coming to replace him and just keep playing? The question then comes up, well, who really is running this team. Well, it’s Mike D’Antoni, don’t forget that. Kobe just lets D’Antoni do his thing, and Kobe figures out how he fits in it. And don’t get me wrong folks; I know Kobe fits round holes in square pegs and wins games doing it. But I’m getting off topic and I’m beginning to sound negative towards Bryant, something I am the exact opposite of.

Kobe Bryant has quite literally given 100% of his body to his team. His iron will and determination has won them games and has also hindered them earlier in the season. The one player on the team who you can never count out, is Kobe Bryant. And that thought process caries right over into how Bryant will handle his injury.

What is the one thing that Kobe knows how to do? Just “do”. Kobe has played through countless injuries in his legs, arms, wrists, shoulders, knees, you name it. He’s a physical specimen who has been proving the naysayers wrong all of 2012 and 2013. His game has been unstoppable at times, and he’s adding new elements to it with his passing as of late. So why would one of the most dominant players of the game just stop after this injury? First of all, I hope no one is really asking that question. It’s rhetorical. He won’t.

Kobe Bryant is probably the healthiest player in the NBA right now (injury withstanding). At 34 his “mileage” is higher than many other players of that same age due to multiple Olympics appearances, plenty of deep playoff runs, and high playing minutes throughout his career. But despite all that, Kobe had one of his best years statistically, amidst a coaching change mid-season and a completely new roster (that was filled with injuries). So Kobe has already proven that the mileage he has seems to not affect his game. It clearly affected his body as he went down because of his severely intense work ethic, but this is the first time his body has actually truly let him down. But now Kobe has the time to rest, the time to heal. This will probably be one of the hardest things for Kobe to overcome since all he can do is wait.

But what is the one thing that Kobe has that separates him from all other players (and people for that matter)? His ability to challenge himself and keep challenging himself. When Kobe finally gets his rehab on track he will work the hardest, the fastest, and keep his already healthy body in the best condition he can. You won’t see Kobe out bowling. The first activity we’ll see Kobe doing is pictures of him shooting 3s or making layups. I’m surprised he hasn’t already been on the bench “helping” D’Antoni coach his team.

Kobe Bryant, love him or hate him for his past, is one of the greatest players the Lakers and the NBA has ever seen. The greatest part? There’s still more to see.

Sam Accardo is a writer for Hefferbrew. He never thought Kobe would actually go down like this, but there it is. He knew the Houston game would be important as the Lakers now are the 7th seed and will play San Antonio for the first round of the playoffs; something that will be much more enjoyable than seeing Oklahoma City Thunder in the first round. Follow the @Hefferbrew for all your sports and entertainment news. And keep checking in for Utterly Fascinating updates on the Lakers.