Plagued by the idea that this may be the Superman movie we’re getting and not the one we deserve (see what I did there). Cameron, spills all he can on why all this is so, very wrong. 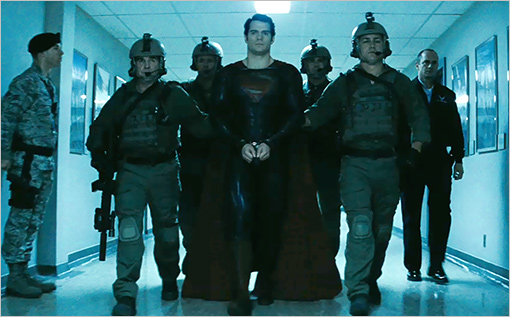 Rumors. These are the things that seem to be making and breaking Hollywood right now. Any post by your friend on the internet about any form of entertainment is always met with the most behest. “Spoiler Alert” acts as the “post no bills” of this generation.

It is unfortunate when something is spoiled, whether it’s milk or  a movie. It pisses you off no matter the medium.

Then there’s the bullshit that’s been spewing out of the rumor mill in Hollywood about the possible Zack Snyder shit-show, “Man of Steel”. Earlier in the week, word broke that Superman’s origin was being tweaked a little bit. You know the one, Alien planet is about to blow up, last baby of that planet is rocketed to earth, that baby becomes Superman, so on and so forth. It’s a story that’s been around since 1938.

Meaning, you don’t fuck with it. Like Batman, Spider Man, Captain America, The Hulk, Magneto, Wonder Woman, and America. You don’t fuck with their origin stories. You just don’t. You wanna screw with Jubilee, go ahead. You wanna say that Green Lantern isn’t a space cop anymore. Fine. But, so help me god if Batman isn’t a billionaire orphan who got his parents shot down in front of him; thus propelling said orphan into a bat-shit (pun so intended) insane justice-fueled romp around Gotham City.

The new origin, if you care, is that Superman’s home planet of Krypton, never blew up. It’s still there in all it’s Super-people producing glory. This time though, Kryptonians are created either to be in a science guild (Superman’s family) or a soldier guild (probably where Zod will be from). Kal-El (Superman, Henry Cavill) will be the first ever Kryptonian to be conceived from S.E.X. (clasp your mouth as if you just saw a ghost), which is a big no-no on their home planet. This causes Jor-El and (‘Supes mom’s name escapes me right now) ‘Supes mom, to jettison Kal to earth. Now, this pisses off Zod and he goes after Kal and that’s why he’s on earth. Now supposedly this may be true, and according to Jor-El (Russell Crowe) is not true. Who knows? We’ll have to wait for that one to be answered.

The new rumor, and most infuriating, is the one that came today courtesy of Yahoo! Movies.

It is rumored, and again, most of this rant is based off rumor. Which I know is wrong to go off of, but this is the same guy who bent Watchmen over a barrel and took 300 out to the back-house, never to be seen again. Oh, and then there’s his own work, Sucker Punch. Maybe you saw it, maybe you didn’t, I’ll spare you details, suffice to say it’s a steamy pile of manure.

Rumor is, Superman isn’t weak to Kryptonite, nope. Loneliness, ladies and gentleman. Loneliness. Yes, the worlds strongest super hero is to only be brought down by depression. Imagine, this scene:

Zod: Neel before Zod, and I shall spare your planet you have so haphazardly adopted.

Superman: Never, I stand for these people now, and I shall stand for them always. This is my home Zod, My old one never wanted me.

Zod: Exactly you fool, and what if this world doesn’t want you? What if they see your powers and fear you, oh how us Kryptonians feared you. You are an abomination, a cancer to the likes of any surface you dwell. You stand for nothing. You mean Nothing. You are a disgrace to the house of El and I shall end you. But, without my fists. You are a sad, worthless piece of nothing and why should I waist even an ounce of effort on you. You’re not worth it; never have been.

Then Superman crumbles to one knee, broken, left confused. Pops a Xanax, gets better and kicks the living daylights out of Zod. Doesn’t sound like Superman, right? Sounds more like that kid you knew in 11th grade who pissed and moaned about everything, even though his parents had an eight-figure bank account and he had all the latest gadgets and sweet kicks too match his horrid, all black attire.

Look, I’m all for changing things up and “making it fresh”. I was cool with the “Karate Kid” becoming African-American and moving to China. I was fine with the X-Men truly becoming the “X-Men” during the Cuban Missile Crisis (This occurs in the comics too, but a later run, not the original). Things like this bother me as a purist-nerd; but I can look past them. My problem is mainly that it’s Zack Snyder doing this. I can’t stress enough how an eighth grader with the education of a Mule could direct better films than that hack. But, it’s not only that, you just don’t mess with things like Superman’s origin and weakness. It’s almost like saying the American Revolution didn’t happen the way we thought. The real American Revolution involved aliens, more of the French and a mechanical spider (just like Wild Wild West, only 150 years earlier.). Yeah, it sounds cool, but it’s a classic and you just don’t screw with a classic like that.

With the notion of Superman becoming an over emotional baby, who has a soft spot for feelings of despair and loneliness. Let me present you with, Exhibit A. Superman III: Or How Superman Beat Himself And White-Collar Crimes:

Superman III was an awful film, beyond bad. Richard Pryor couldn’t save that film, and Christopher Reeve was so checked out in it, it was like a cardboard cut-out had, for lack of a better example, popped a Xanax. Superman isn’t about gritty realness or relating to the common man. It’s about struggle in the face of adversity with the world on your shoulders. It’s inspirational, yes, but at the same time he’s an unattainable character. He’s not the goddamn Batman, as a matter of fact Hollywood, ALL COMIC BOOK CHARACTERS ARE NOT BATMAN. Not everything has to be brooding. This is what was great about Iron Man 3, it balanced genuine humor and character building as well as over the top special effects and dark undertones.

All I’m really asking for is that there never be another Superman III. And so far, from what it sounds like, Man of Steel, will follow in those Debbie-Downer shoes of once before.