With controversy swirling around game seven, we take a look at all the angles, and who will win a trip to the NBA Finals. 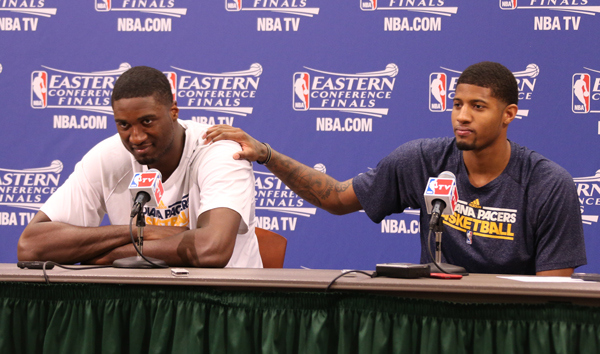 The whole Roy Hibbert/”No-Homo” Thing, Where Do We Stand?:

Saturday night, Roy Hibbert was at the Pacers’ post-game press conference, when he decided to let fly with some profanity and even dropped a “no-homo” after referring to being “stretched out” by the Miami defense. He giggled after saying it, as if almost still in the privacy of the locker room. The picture to lead this article has Paul George placing his hand on Hibbert, directly after he uttered the controversial words, as if to say, “you’re about to pay a lot of money to the league”.

Hibbert did pay a lot of money to the league – $75,000 to be exact – and why? He used a common phrase, that most men use even when not in the privacy of the locker room or their own home.

“No-homo,” I’ve used it when the comedic timing is proper, it’s almost the “man” way of saying, “Yo, bro I love you, we’re bros’, but I mean that love in a no-homo way. Mainly because I’m not self-confident enough to project my actually masculinity, but instead I demean certain groups in order to feel superior and mask my more natural, uber-femininity.”

It’s something that can roll out of some ones mouth with no effort in order to garner a laugh – yes it is a cheap laugh, but nonetheless, some people just aren’t funny so they use short quips and things they’ve picked up in conversation to be funny. Hibbert thought the context he was using no-homo in was fine. He described being stretched out by the Miami defense due to Chris Boshs’ perimeter ability, and thus made a half-assed joke with the no-homo quip at the end.

Is Roy Hibbert homophobic? I don’t know, I wish I could tell you, but I can’t. I can almost guarantee he may not be, but that’s purely speculation. Hibbert was quick to apologize, issuing a statement that can be read anywhere, something I don’t really need to get into. I’m sure you can figure out he apologized and even extended an olive branch to Jason Collins – as if he’s just the brand new token gay black dude of the NBA that deems whether what you said was truly hateful, or a haphazard joke that slipped in the moment. Hibbert comes across as the latter, but to most mainstream media outlets – mainly the FOX News of Sports talk radio, ESPN LA 710 – they believed it to be true hate-speech, or at least some apart of the Mason and Ireland show did.

Sometimes stupid things slip when you’re talking; it’s that same thing inside you when you were a kid, that made you bring up how your friends parents were getting a divorce in front of every parent on the block.  No one escapes putting their foot in their mouth, we all screw up somehow anywhere from three to 15-million times a year. Does Hibbert deserve to be called a homophobe? No.

He said a stupid thing in the heat of the moment, looking for a low-brow and cheap laugh, which he slightly got and slightly didn’t. He also when on a profanity-laden tirade about how no writers watch the Pacers and how no one cares about small-market teams. He was heated, he bombed on his “no-homo” joke, got even more angry and let loose. It happens to the best of us, unfortunately.

Also, where is the line on the whole “no-homo” thing anyway?

If it’s satirical, per say with The Lonely Island making an entire song to it, it’s fine?

Then when it happens in the ultra-masculine world of professional sports – along with the predisposed idea that all black men are homophobic – it’s automatic that the one saying it is a hate monger and a homophobe? You want to believe that when fighting for equality – which I’m all for, in no way am I trying to make a case for using the term more, or any slur for that matter – it will be, essentially, equal.

Now, on to the preview.

Apologies for the botched Lord of The Rings reference to begin, anyways, where were we.

Who would’ve thought that the team with the old geezers (the Spurs) would be going 12-2 on way to their fifth Finals appearance in the last decade. And, LeBron James, Dwyane Wade and Chris Bosh would be at 11-4, struggling through a team that consists of five solid starters and Tyler Hansborough, staring down the barrel of a do-or-die game seven.

Some may say, they saw Indiana’s big men putting up just enough of a fight to win two games, but three? Including one in Miami? No way, impossible. Here we are though, mere hours away form tip-off in what will be more then likely a free-throw fest for the ages.

Miami has shot less free throws in this series than Indiana has. I repeat, less. 174 for the Pacers, to 137 for the Heat. That just seems odd, Right?

37 free throws minimum is what I’m expecting for the Heat tonight, maybe by the end of the first half, just to make up the difference the Pacers are already ahead by. It’s been a wonderful run for the Pacers, it really has. Hell, there play earlier in the season is the reason I placed money on them – and the Spurs for that matter, like 5 months ago – they’re a solid five man team, plus Hansborough. Other than that, they just don’t have enough firepower. It’s been great to watch Roy “No-Homo” Hibbert explode out of his shell he slightly emerged from last year. Paul George is the man, and will be for the next 15 years, but it ends tonight for Cinderella, and not in a pretty manner either. I’m talking, Robb Stark’d – all sorts of messy.

The Heat are out for legacy; they don’t want to be like the Celtics, they’re not old and a super-team like themselves should muster more than one championship in two Finals appearances *cough, cough, like the Celtics*. They’re a the best team in the league, with the best player on the floor. I can go on all day about inside-outside play by the Pacers, and how they do have an honest chance at beating the Heat. But T.V. ratings, the NBA and really the basketball gods in general, have no pity for the Pacers this day. The villains shall rule supreme – for maybe a few more years – but soon, it shall come crashing down – when Bron goes back to Cleveland, or *gasp!* Brooklyn? Just saying, Jay-Z has some clout – and when it does, it will more than likely be at the hands of the Pacers.

Even though they won’t win, the Pacers are surely the second best team in the East for the foreseeable future, and to fans in the heart of basketball country (Indiana, that is), it really isn’t that bad of news. Maybe not this year, but hey, who knows? Maybe two years from now. And at least this time you got past the Knicks with no problem.