We take a look at this summer’s biggest blockbuster, Man of Steel. 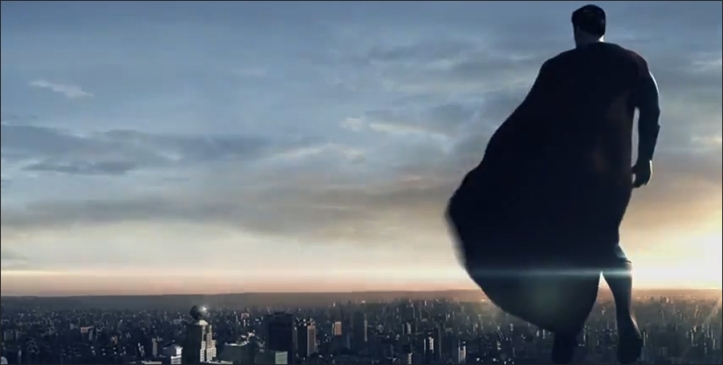 When it was first announced that Zack Snyder would be directing the reboot to Superman, I said “Oh crap, this is gong to be a four hour movie due to all the slow motion.” Well, there wasn’t any slow motion. Can you believe it? A Zack Snyder film with no slow motion. There were many opportunities, including the utter decimation of Metropolis, but Snyder seemed to refrain. Almost as if there was some directing god, sitting behind him, coaching him in the ways of making a decent comic book flick.

Man of Steel, isn’t like Batman, but it certainly plays out like a Christopher Nolan film. With brooding undertones and your hero faced with the most dire of situations. ‘Steel’ plays out like the Superman film we’ve been waiting on for the better part of a decade now. And yet again, all your DC superhero needs are answered by Nolan, but with a figure head this time in Snyder. Someone, whom myself had no faith in, but somehow seemed to get the job done. It’s was almost as if Nolan wanted to operate like Batman with this one; from the shadows.

If you’ve seen Snyder’s other works, 300, Watchmen and Sucker Punch, then you know what I’m talking about. Snyder has a very distinct style, one in which he likes to slow everything down to a snails pace so you can see every ripple in someone’s cheek as its destroyed by the knuckle end of a fist. He, much like Nolan, uses dark ambiance and lighting to set the mood in his films – not as well as Nolan, but nonetheless, he tries.

‘Steel’ isn’t your normal Superman story, let alone like any of the other Superman films that were made before it.

Like Superman II, the main villain is General Zod (Michael Shannon) and he’s hell bent on destroying the Earth and the only person who can save us is Superman (Henry Cavill). Other than that, none of this film plays out like boy scout Superman we’ve all grown to perceive the character as. Pa Kent (Kevin Costner) is still filled with life lessons for young Clark, but he’s also reluctant to let his son show the world his gifts. To almost xenophobic lengths at times, Kent is a man, who has an old school American mentality about aliens, and the idea of illegal immigrants too, being from Rural Kansas – Smallville to be exact. He doesn’t feel that the world is ready for someone like his son.

Thankfully – and this is one of the best uses of flashbacks I’ve seen in a superhero flick – all of Clark’s early life is portrayed through flashbacks. As you get to know the older Clark Kent, an almost drifter/nomad, who goes from town to town, living in peace until his hand is forced by some sort of disaster. Once he’s exposed as the “freak” he thinks he is, he’s forced to go back on the road; away from society. Kent is very much an illegal immigrant story – he’s a lone child of a dead world, searching for somewhere to belong in his new home – when he’s older and no longer on his family’s farm. He picks up medial jobs here and there. There are flashes of his heroics, that sprout an urban legend about a sort of “Super Man”.

Superman’s humanity is realized through his encounter with Lois Lane (Amy Adams) – rather quickly I may add, but hey it was a run time of 160 minutes, so.. It’s okay if they expedited a few things. Lois is reporting on a dig site in the Antarctic, where the government has discovered an alien spacecraft 20,000 leagues under the ice. It’s here that she meets Superman, who is working as a bag boy for the helicopter transport to the dig site, while digging around the site – after hours, like a good journalist – she discovers a hole that Clark has created in order to get to the ship, before the government does, and thus the seeds of love are planted.

It can’t be stressed enough, this is the best Superman movie, ever. I love Richard Donner’s Superman I and II, they’re classic films. Cornball-ish, but nonetheless, they’re classic. This movie isn’t about happy-go lucky Superman. This is a man, who is lost to society, through most of the movie, he wanders form place to place saving people with his super strength, but there’s no suit. It’s just him and a pair of Levi’s.

He gets the suit, don’t worry. When he gets the suit though, it is on. Unlike any other Superman movie, this one entails a lot of collateral damage, and one of the more beautiful stroke-fest special effects jobs I’ve encountered.

It’s a wonderful movie, that was obviously overseen by Christopher Nolan to the last edit. None of this film feels like a Zack Snyder piece, and you can accredit this to why it’s such a good movie. Unlike Watchmen, 300 and Sucker Punch, you actually feel like something’s at stake and that the only man for the job, is Superman.