Evaluating the Aftermath of Dwight’s Decision- by Dustin Brewer

Dwight Howard is going to the Houston Rockets, Andre Iguodala is the newest Warrior and the Lakers are in a position they’re not used to. Dustin takes a look at the impact Dwight’s decision has on all the teams involved in the pursuit.

For the past few weeks NBA fans have been treated to an unpleasantly familiar sense of deja-vu. After the Heat won their second consecutive title, talk immediately shifted to the impending free agency and more importantly, where the off-season would take Lakers C Dwight Howard.

Howard had a much criticized (and below par and expectations) season with the Purple and Gold and his very public disagreement with coach Mike D’Antoni as well as his inability to gel with the  notoriously competitive Kobe Bryant all but ensured that the speculation and media hype surrounding Dwight and if he would re-sign with the Lakers or leave after one year would be back and ten-times greater than in 2012 when Orlando fans suffered the same ordeal.

On Friday afternoon, after weeks of speculation, Dwight Howard announced on his Twitter that he was going to sign with the Houston Rockets, a 4-year deal valued at around $88 million (tax-free even). His decision left an extra year and $30 million more on the table that LA was offering, but a disdain for Mike D’Antoni, not wanting to play in Kobe’s shadow and PG Steve Nash’s advanced age had Dwight convinced that Houston was the place to be.

“I’ve decided to become a member of the Houston Rockets. I feel its the best place for me and I am excited about joining the Rockets and I’m looking forward to a great season. I want to thank the fans in Los Angeles and wish them the best.”- Dwight on Twitter.

It’s no secret that more than a few teams were trying to make the moves necessary to convince Howard to sign with them and in the end, Howard could only pick one, but what does that mean for the other teams that were courting him?

Houston Rockets- They said all along that their plan was to land Dwight and moves like signing G Jeremy Lin and acquiring G James Harden before last season immediately elevated Houston’s legitimacy as Western Conference contenders. They were eliminated in 7-games by the Oklahoma City Thunder in the first round of the 2013 playoffs, but fans and analysts took note of their up-and-coming roster. Now, they’re adding Dwight Howard, a player who can, if he returns to the level he was at before the back injuries/surgeries, dominate the glass and defend the paint like no one else in the league today. That he chose to go to Houston already suggests a lot about his head space and attitude heading there. It’s no secret that Dwight wanted to play in Brooklyn last year, but was acquired by the Lakers in a four-team sign-and-trade deal; not his first choice by any means. Maybe the key to all of this is that Dwight just needs to be happy and Dwight’s not happy unless Dwight gets his way. Houston and their fans are hoping Dwight has lots to be happy about these next four years. Omer Asik, the solid C Houston got from Chicago last year is likely on the outs, reports are that he’s unhappy Dwight is coming to the Rockets and he is likely going to request a trade at some point soon. Asik is a very reliable big man and he started all 82 games last season, but, Houston’s decision to pursue Howard is as no-brainer as it can get, given his potential.

Los Angeles Lakers- How many times have the Lakers landed a marquee free agent or pulled off a blockbuster trade that immediately turned them into an unstoppable team on the way to a title? Too many to count. This marks the first time though that a superstar player has walked away from the team, the spotlight and the glamour (to everyone saying Shaq, even he was sent to Miami via trade.) This time though, there was no miracle deal, no 76ers team ready to take the broken and all but useless player (sorry, low blow to Philly fans but really, Bynum? You had to have known it likely wasn’t ending pretty.) It’s easy for fans to say “Oh he wasn’t a Laker to begin with, he didn’t embrace the city like someone really interested in the team would’ve” but his departure does hurt the team more than it seems. The team still has Pau, Steve Nash and of course Kobe, but keep in mind that Kobe likely won’t be back until mid-December at the earliest because of his Achilles’ injury, this means the team with no cap space and no bench, will have to go without its’ superstar player for the first two and a half months of the season. The team has already made it known that they’re trying to shed cap-space and free up salary so they can try to attract a few of the huge names hitting the market (LeBron James, Carmelo Anthony and many, many more) so they can load up and rebuild for the life after Kobe, a reality that is at the most, 3-4 years away. Speaking of Kobe, how did he take the news that Dwight was leaving you ask? In what is possibly the greatest reaction ever, Kobe unfollowed Dwight on Twitter and then posted this picture on Instagram. Next year will not be a fun one for Lakers fans, the team may still make the playoffs, but more than likely, they will be outmanned and outplayed more nights than they won’t, but all they can do is hope that 2014 brings greener pastures to Hollywood once again.

Golden State Warriors- Out of the darkness comes the Knight. Damn. After one of the most exciting playoff runs in recent memory, fans knew the Golden State Warriors would one day be a legit contender to the Western Conference, but it’s doubtful anyone expected it’d be this soon. After meeting with Dwight on Monday, the Warriors began salary-dump-a-palooza, trading Brandon Rush, Andris Biedrins and more, freeing up over $40 million in an attempt to lure Dwight with a max deal and the most exciting backcourt in the league with Stephen Curry and Klay Thompson. The thought of the Warriors landing Dwight became even closer to a reality when it was announced that they had signed F/A F Andre Iguodala to a 4-year deal near $48 million. Even though they didn’t win the Dwight sweepstakes, they finally have the defender that can elevate the entire team on defense. It’s no secret that the Warriors have offense to spare, but defensively they needed a bit of work. Adding Iggy is the perfect solution, he fits right in on offense with his tendency to facilitate and defensively, he can go toe-to-toe with anyone in the West. The Warriors are quickly becoming one of the most enticing destinations a free agent could ask for, with young talent, a fantastic coach (Mark Jackson) and one of the best fanbases, Golden State could easily contend with the 2 teams in LA for basketball supremacy in California.

Atlanta Hawks- How much does it suck for Atlanta right now? They couldn’t convince Dwight (who’s from Atlanta) to sign with them and now reports are saying that the Rockets have entered talks with the Hawks for a sign-and-trade deal that would send F Josh Smith to Houston to play with his longtime friend Dwight. They were also briefly mentioned as a potential landing spot for Clippers PG Chris Paul, who rumor had interested in playing with Dwight and teaming up in Atlanta. So, instead of pairing them together in Atlanta, the Hawks get to see both of them disappear before their very eyes, that’s harsh, losing J Smooth just adds insult to injury. It’s been an odd time for the Hawks franchise in recent history, they’ve consistently made the playoffs but have never really looked like a team prepared to make a deep run, usually being dispatched in the first round. Fans have loftier expectations than that and pretty soon they’re going to expect the team to start making blockbuster moves so they can fight for relevance in the East.

Dallas Mavericks- Stop me if this sounds familiar- all season long, we heard Mark Cuban and the Mavericks talk about the rebuilding process and how they were coveting a free agent that they could pair with Dirk Nowitzki and return to the finals with. Last year, it was Deron Williams (he’s in Brooklyn) and this year, Dwight (their in-state rivals, Houston). The stars don’t seem to shine too bright in Dallas, Dirk is rapidly aging and took months to return to semi-form last year coming off an injury and nearly every other piece is expendable but lacks true value. The allure doesn’t seem to be as great as Cuban believes it is and it’s unlikely fans will have much to cheer about through 2013-2014, but I’m sure, as it gets closer to the summer of 2014, Mark Cuban will have plenty to say about how the Mavs will finally land the big free agent he’s so desperately coveted, only to have his hopes dashed again.

Orlando Magic- I know there was never a chance Dwight would go back and I’m not suggesting that. I just merely wanted to point something out:

The Magic may have actually won this 4-team trade that they were so endlessly mocked for just a year ago. Resigning Aron Afflalo is the teams’ priority but they’ve managed to keep most of the role players obtained and are hoping some help is on the way in the form of all the draft picks they got in the trade as well. It’s hard to fathom but Orlando has emerged on top of the deal and honestly, they deserve it. They did everything Dwight wanted (including firing their relatively successful coach; Stan Van Gundy) and he still left them first chance he got. Hopefully the NBA gods smile upon the Magic soon and they can let the Howard-era become a distant memory for them and their fans.

Dustin Brewer is co-creator of HefferBrew and as a longtime Lakers fan even he is happy to put the Dwight Howard saga to bed. As for next season, he’s betting the best part will be all of Kobe Bryant’s #MambaTweets. 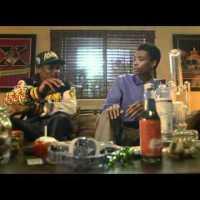 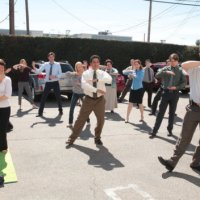