We take a look at the NBA landscape in the heat of the playoff race. And the recent breaking news of Mike D’Antoni’s resignation as the Lakers Head coach.

Breaking News: Mike D’Antoni resigned as the Lakers head coach and now you can offically panic as a Laker fan:

This may feel like a time to celebrate. I know, I felt this very same way a long time ago when Rick Pitino was coach of the Celtics. But, they never pulled their shit together after – as a matter of fact, the Celtics were a laughingstock until the Garnett trade, Doc coming over and other such happenstance. Now they’re back to being a joke. That’s neither here nor there.

According to a report from ESPN’s Ramona Shelburne, Mike D’Antoni has stepped down as the head coach of the Los Angeles Lakers.

Here’s the problem Lakers fans: Who’s going to save you now? There’s no Brad Stevens, and Kobe would never let a former college coach be his leader. What are the coaching candidates? Remember when it was, “Phil this,” and “Phil that,” well since that ball was dropped Phil is now in New York and more worried about keeping Carmelo, and not what the Lakers are doing. At this point the rest of the coaching pool may be Mike Brown, again. Back to Kobe now: Other then Phil, who has reigned in Kobe? NO ONE.  So, now you have no coach, an aging and defiant superstar, a ton of cap space, a terrible owner, a milquetoast general manager (yes Kupchak. He’s milquetoast), and a fan base that’s ready to switch the LA symbol from purple and gold to red, white and blue (Clipper Nation, baby! We Are ONE).

Yes, have the “ding-dong, the witch is dead” parade, but then, please, I’m begging you. Come back down from this cloud that you’re on, and realize. It’s probably further down hill from here.

Oklahoma City hasn’t looked bad, per say; although they certainly haven’t seemed like the best team in the series. That honor is bestowed upon the grit-and-grind Memphis Grizzles. Taking three games in a series is never easy. Taking game fiveon the road is even harder. The Griz have done both, and now head back to Memphis, having a chance to upset the No. 2 seed in the Western Conference – as well as everyone’s pick to make the Finals. Game one was a slaughter by OKC, 100-86 – and we all thought we had seen the last of the Grizzles as well as a paved golden road for OKC to the Finals.

Then came overtime in game two, which saw Memphis winning, in OKC no-less, 111-105. Then Memphis took a 2-1 series lead at home, beating OKC 98-95 in overtime. Then OKC tied the series with another overtime, a 92-89 victory. And then the fourth overtime saw Memphis winning, in OKC again, 100-99, gaining a 3-2 series lead and the comfort of closing out a team at home.

This was not the road the Thunder had in mind. This was a championship or bust team when the season started and now may be bounced in the first round by a team that barely made the playoffs in the uber-competitive West. The Grizzles deserved their playoff spot, and they’re making more than the most of it. The Griz will most likely pull off the upset in Memphis tomorrow, and nothing will be done about Scott Brooks in OKC.

You can wax-poetic about the Harden trade, or the non-amnestying of Kendrick Perkins. It comes down to this, though. A first year coach, is about to knock one of the best teams and the second best player in the league, out of the playoffs. If that’s not on Brooks’ head, then I don’t know who.

2. Portland Vs. Houston is probably over tonight:

Not a lot to write here. If it gets closed out – which it will – it will all fall on the giant shoulders of Kevin McHale and Dwight Howard. Howard was abused in games one and two; allowing LaMarcus Aldridge to score 40+ points in each game. McHale has been abused all series, unfortunately. The Trailblazers matched up too well with the Rockets, who had home court advantage. It’s really been sad to watch. Here’s a picture of happier times, before McHale is most definitely fired this offseason: 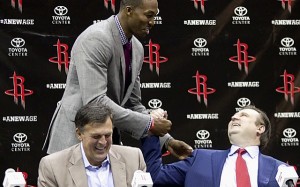 And practice with James Harden: 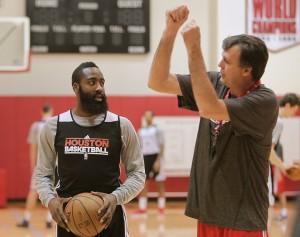 So long Kevin, and thanks for all the post moves.

3. The Pacers are done. Even if they come back, they’re not going to beat the Heat, or even the Wizards if it comes to that.

I think I said it all there in the title. Their problems go past coach Frank Vogel, and beyond the withering daisy known as Roy Hibbert, this even goes beyond Paul George and his dick picks/house getting broken into/ getting heckled by fans. This is something we’re going to cover more tomorrow, when they lose. We also don’t… Well, at least I don’t know enough about the Hawks’ no-name roster to give an informed opinion. As a matter of fact, I don’t think anyone knows who is on that team. Even Paul Millsap and Al Horford.

4. Oprah Winfrey wants to bid on the Clippers:

OPRAH ‘MOTHER FUCKING’ WINFREY Wants to put a bid on the Clippers. You heard that right. Originally, I was hoping for her, Kevin Hart, Jay-Z/Beyonce, Denzel Washington, President Barack Obama, and Neil DeGrasse Tyson, to band together and form some super-group of African Americans to shove in Donlad Sterling’s face ( It’s times like these I wish I recorded my conversations, cause I literally made a joke about Winfrey buying the Clippers on Monday. If only I had a mistress who recorded my conversations, damn!). Instead, she’s joining forces with other noted billionaires, David Geffen and Larry Ellison, to possibly put a bid on the franchise.

A boy can dream though, and at this point all I can hope is that the Queen Bee Winfrey gets her wits together and forms the first completely African American ownership group.