“The Purge: Anarchy” offers a decisive improvement over the first film in almost every category. With an opening weekend that’s already yielded three times the film’s budget, it’s clear a new franchise is here to stay. 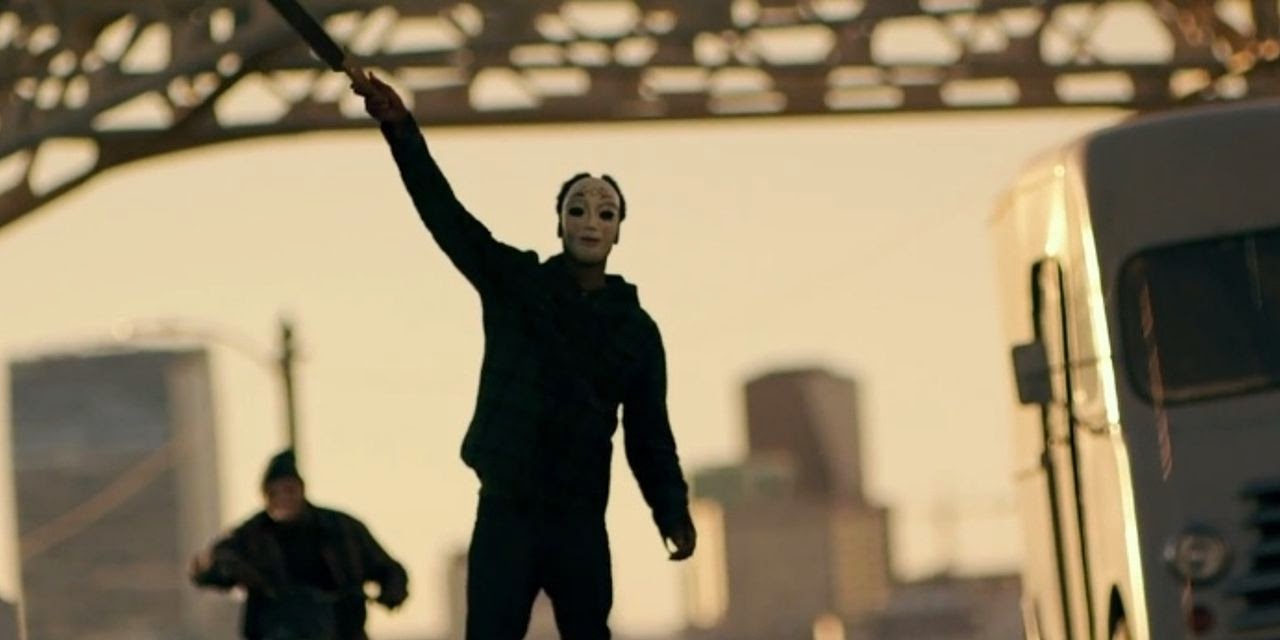 In the year 2023, crime is nearly nonexistent and the unemployment and homeless populations are under 5%. This is all thanks to the purge; for one night a year, 7pm-7am, all crime, including murder, is legal.

Last year, “The Purge” was released and brought with it the kind of concept that keeps groups of friends arguing for days after seeing it. Unfortunately, the interesting concept and it’s effects on society were overshadowed as the movie focused on the events in one family’s house for the duration of the purge.

“Anarchy” corrects that immediately as we find a few different groups of people who, for various reasons, find themselves out on the streets when the sirens sound for the purge to begin.

Among them is a mother/daughter driven out by an attack on their apartment complex, a young couple with relationship issues who’ve had their power steering line cut while grocery shopping and are now stuck on a freeway and a man in an armored car with the type of arsenal the Punisher would be envious of.

The first 15-20 minutes or so not only handle the obligatory character introductions and reasons for them having our sympathy, but it also takes an idea from the first ‘Purge’ and runs with it.

The idea is that if all crime was legal for 12 hours, it would eventually break down to the rich and powerful murdering the poor/homeless. Throughout “Anarchy” there are hints that that’s where writer/director James DeMonaco (who also handled both on “the Purge”) is heading; strange 18-wheelers full of armed soldiers breaking into only certain apartment complexes and dragging some people out while killing others, a sick character selling himself to a rich family to be purged so that his family doesn’t have to struggle financially or with his bills anymore and most apparent; a Malcolm X-esque revolutionary who speaks of overthrowing the new Founding Fathers (the government officials who started the whole purge thing in the first place when they took power) and showing the upper class the violence that they can afford to protect themselves from.

This is presented as our characters are all trying to survive group after group of purge-crazy citizens relentlessly pursuing them which makes the slow moments where the plot is touched on a little more that much more valuable. If you enjoyed the “Purge” or are a fan of horror movies in general, you’re going to have a blast trying to piece together the conspiracy story as well as thinking about all the possible directions the story can go from here.

DeMonaco does a good job of getting our group together, led by Frank Grillo as a man only referred to as Sergeant who is armed and prepared to purge for reasons that become clear as the film goes on and keeping the story moving once they do. Before the purge starts, it is a little slow as they introduce everyone but after those 20 minutes, it’s relentless til the credits roll. Every scene once the purge starts is filled with suspense as you know no one can really be trusted and that a new threat is waiting around every corner.

Of course though, above everything else; the biggest draw to these films is the “What would you do?” scenarios that play out in your head as you watch every character make their decisions. Where would you go if the purge was real? Would you hide out? Would you actually purge? Would you be able to kill someone?

Leaving the theater I heard a bunch of other members of the audience discussing all of those and more. “I’d just drive to the desert, like, 50 miles away from the nearest people and camp out” was one suggestion that I heard while “I don’t know, there’s a few people I’d definitely want to purge but I don’t know if I could do it” was what dominated the post-purge conversations.

There were a few moments where I thought the plot was going to steer into “Hostel” territory and fall into the trappings of the “Saw” films and focus on the gore but fortunately, it stays on track and seems more interested in condemning the violence then glorifying it.

“The Purge: Anarchy” is a movie most will see because of its’ interesting scenario and delivery of some memorable scenes of violence and chaos, but it will stick with audiences long after viewing because  of its’ commitment to the bigger picture and for having limitless possibilities for future installments.

The film ends letting us know there are only 364 days until the next purge, but based on its’ success, we’ll be purging again well before that.