The 2020 NFL Draft will be one to remember for years to come due to its’ unusual formatting and circumstances, but for some teams, it may also be one they want to forget. Dustin takes a look at some of Night 1’s big winners and losers.

*note: This article has been updated to include the massive L taken by the Carolina Panthers.*

The 2020 Virtual NFL Draft At Home wasn’t the complete technical disaster that so many had predicted in the weeks leading up to it. For almost half of the first round everything was basically going chalk. A few trades here and there but hardly the fireworks that a sports-starved world was hoping for. That isn’t to say that it was all business as usual though. Here are a few teams who got their draft night very right, and some teams who may be wishing there had been a technical glitch or router crash to help spare them the ridicule.

Winners:  Arizona Cardinals
The Arizona Cardinals selecting OLB Isaiah Simmons would be a great night for the team on its’ own. The swiss-army knife player logged over 200 snaps at three separate positions last year for Clemson and will add speed and versatility to the Cardinals defense. Then you remember that the Cards were able to draft Simmons with the 1st round pick that they kept despite trading for DEANDRE HOPKINS. In just a few short weeks the team has completely revamped their already promising roster and look to be a buzzworthy team heading into the next season.

Winners: New York Jets
Leading up to the draft most analysts had the Jets selecting one of the three elite prospect WRs available in the draft but while the team didn’t get QB Sam Darnold any new weapons, they did try to help prevent him from being completely abused and embarassed by a team ever again. Mekhi Becton is an OT from Louisville that stands 6’7″ and weighs 364 pounds, adding some serious size to the Jets’ O-line, which is sure to help Darnold continue to develop and buy him more time in the pocket to let plays develop.

Losers: Las Vegas Raiders
Look, with three elite WR prospects in the draft, taking any of them isn’t really a miss but the Raiders selecting Henry Ruggs III from Alabama doesn’t quite make sense. He ran the fastest 40 at the NFL Combine and instantly gives the Raiders a Tyreke Hill-type weapon that can stretch the field. The only problem? Raiders’ QB Derek Carr (and backup Marcus Mariota) isn’t one to stretch the field with huge throws. Carr isn’t afraid to checkdown to his RBs and as long as he’s still under center it’s going to be hard to fully tap into Ruggs’ potential. Combine this with their selection of Damon Arnette of Ohio State at 19, a corner who flashes potential but was ranked as a 3rd-round prospect, it feels a little bit like the Raiders reached rather than found the best value/fit.

By all accounts the Panthers were high on LB Isaiah Simmons and thought that he was the best overall athlete available to them with the 7th pick. So they picked him right? Wrong. They went with DT Derrick Brown. Brown has high upside of his own right but the logic behind the decision seems to be a bit questionable:

The Panthers liked Clemson LB Isaiah Simmons a lot at No. 7 and he was the best pure athlete on the board, but they felt he was a better fit for a veteran team because of his ability to play so many positions. So they went with Auburn DT Derrick Brown,… https://t.co/Wfu6yhMSgv

So to paraphrase: “Yeah we think Simmons is probably the best available player by far but really, his versatility to play three separate positions for a defense when ours just lost LB Luke Kuechly is better suited to help a veteran team, we took Derrick cause he’s more likely to need time to develop while we try to figure out what we’re doing.”

Not the best way to start the Matt Rhule era in Carolina.

Losers: Philadelphia Eagles
If you were healthy for 17 weeks last year, congratulations, you lasted longer than an Eagles WR! The team had such an obvious need at the position that it’s no surprise they were linked to a potential move up to grab Jerry Jeudy, Henry Ruggs III, or CeeDee Lamb. Yet, that move never came. They watched the Cowboys swipe CeeDee Lamb and then, with LSU WR Justin Jefferson still on the board, they took Jalen Reagor from TCU. He’s fast (he ran a 4.47 40 at the combine) but he doesn’t have the same upside as one of the other receivers or even Jefferson. The team needs to get weapons for Carson Wentz that can stay healthy and catch the ball, if Reagor struggles at all while Jefferson and the other receivers flourish, it may get ugly early in Philly.

Losers: Green Bay Packers
Remember when the Packers selected Aaron Rodgers to be the backup and heir apparent to Brett Favre and Favre was totally cool with it and was a great role model and mentor to young Aaron? No? That’s because it didn’t happen. History repeats itself as the Packers took QB Jordan Love from Utah State after trading up to get the 26th pick. Instead of adding an instant-weapon to the team’s offense or filling a hole on their offensive line, or bolstering their run defense with a LB or DT, the team selected a backup QB that seems to put a ticking clock on Rodgers’ time as the starting QB. This is an insane move that could make for an extremely volatile relationship between Rodgers and the team. I joked that Bill Belichick is going to swoop in and trade for ARodge but honestly, it’s too realistic to laugh at right now. The Packers had an array of options to choose from and they did the one thing that could possibly destroy the team from the inside out after being one game away from the Super Bowl last season. When football comes back this is going to be the story to watch for sure.

*note: Love is a good QB and a Top-10 prospect at his position so this isn’t to take anything away from him, it’s just crazy that the Packers would be the team to do it after signing Rodgers to a 4-year extension that isn’t realistically tradeable until at least 2022.

Even with the draft being held remotely and players at home waiting to hear their names, fashion was still a hot topic. Some players opted to wear full suits. Some went kinda casual with jeans and a t-shirt or sweats. Henry Ruggs III took all of that a step further with an instantly-legendary choice: 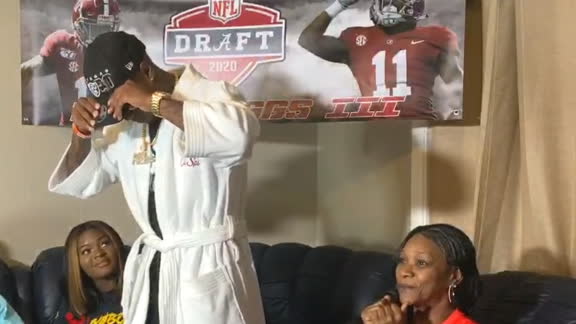 That’s right. Henry immediately popped on the Old Spice robe for added comfort in what is certainly one of the biggest moments of his life so far. The move had more than just sponsorship motivations though. Ruggs wore the robe in part to bring more attention to Old Spice donating $320,000 to the United Way on behalf of the rookies from all 32 teams to help with the COVID-19 pandemic. All in all it was the perfect way to play off of the at-home aspect of the draft while raising money for a great cause.