The NHL Announce Their Return Plan – by Dustin Brewer

Dustin reacts and breaks down the announcement of the NHL’s impending return to action and the details surrounding their plan.

In a 15-minute video posted to the NHL’s YouTube account, commissioner Gary Bettman detailed the league’s plan for returning to play and to finish their season. The quick notes version of this goes as follows (assuming all goes well with ongoing pandemic recovery and it is declared to be safe to move forward):

Here are the announced matchups and standings for the 24-team playoff should it be allowed to move forward: 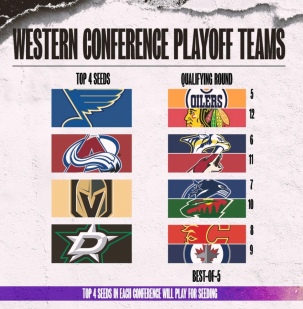 There’s a lot more that Commissioner Bettman covers in the video including plans for the NHL Draft Lottery but those are the primary points that have been making headlines across the sports world. With the caveat of everyone eager for sports to resume aside, the plan, and Bettman’s actions throughout the pandemic, are being widely praised and seen as a chance to help the NHL gain new fans and improve ratings.

As someone with little more than a casual rooting interest in hockey most of the season and a bit more in the playoffs, this idea to resume play is a massive W for the league. Play-in tournaments are already one of the most exciting parts of March Madness and to infuse the excitement of a play-in with the already unrivaled excitement of the NHL playoffs is going to make for some electric games even without fans in the arenas.

It’s weird that the first of the major four sports (NHL, MLB, NFL, NBA) would be the NHL and its’ especially weird that the plan would be so universally praised considering Gary Bettman is typically one of the least popular commissioners. Between his handling of the situation, the solution that has been proposed and accepted, and MLB commish Rob Manfred wrist-slapping two major cheating scandals and calling the World Series trophy a piece of metal, ‘ol G-Bett has to be enjoying a big bump in his approval rating right about now.

It’s also fitting that the NHL would announce their plans on a day that stories about the NBA’s return continued to grow louder with a rumor surrounding soccer-like Group Stages. With MLB struggling to agree on a plan, the NFL seemingly just chugging along like the juggernaut it is, and the NBA looking for ways to reinvent themselves, the NHL has done a great job to reassert themselves back into the conversation among the other leagues. Not to mention the fact that most teams seem to be in on the idea as well.

The NHLPA approved the 24-team tournament idea with a 29-2 vote last Friday and assuming things are able to go as smoothly as possible and ratings are high, there’s no reason to think the league won’t look more seriously into adopting this type of format to help generate more buzz and excitement among fans.

Even though a tournament is still months away, for die-hard fans and casuals alike, this is a great chance to get excited at the thought of sports finally starting to come back in some capacity. Hats off to the NHL for being able to come to an agreement and looking to innovate in a way that gives fans the excitement they want along with the type of fair competition that the teams need.

Stay tuned to hefferbrew.com for the latest from the NHL & across all sports leagues as we begin to learn more about how sports will return. Follow us on Instagram or on Twitter for even more updates.