After an injury-filled Week 1, Dustin is back with tips to help you navigate your waiver wire and rise to Week 2 glory.

It’s the perfect time to overreact to all the biggest headlines from Week 1. Are you scrambling to add Malcolm Brown or Sammy Watkins? We got you covered with this week’s Start ’em or Sit ’em to help you decide who you need to target on the waiver and what you need to go for victory.

– Joe Burrow – It sounds crazy to say you should definitely start a rookie QB playing just his second game on a quick turnaround to play on Thursday night but the Browns defense is already injured and just got embarrassed by the Ravens offense yet again. Yes, the Ravens are one of the top teams in the league but Burrow’s running ability and ability to throw accurate passes in tight windows should see similar success against an underperforming Browns secondary.

– Josh Allen – Watching Josh Allen play against the Jets last weekend was an incredible rollercoaster of emotions. He had two of the worst fumbles you’ve ever seen but also then ran all over their defense and made plays with his arm. Next up is a Dolphins defense that just let Cam Newton run all over them despite every single person in the world knowing he was going to run. Allen is a strong, physical runner and his upside on the ground should more than make up for any passing struggles.

– Tom Brady – Yes he looked every bit of his 43 years old last weekend against the Saints but the Panthers are definitely not the Saints on defense. They just let Derek Carr go deep on them and he hasn’t thrown a ball further than 8 yards in like three seasons. With Chris Godwin currently in concussion protocol, this may be a bit more of a struggle than it should be but the quality of defense should help you feel a bit better about starting Brady.

– Carson Wentz – This poor dude. At the rate he’s going there’s no chance he finishes the season healthy. The Eagles offensive line just let him get absolutely decimated for 8 sacks from the Washington Football Team’s defense and next up is a matchup with *checks notes* Aaron Donald and the Los Angeles Rams.

– Deshaun Watson – It’s not Deshaun’s fault that he’s coached by Bill O’Brien who decided to trade away one of the best WRs in the game. But he will have to take the consequences for it. The Ravens D absolutely throttled the Browns and may have begun the beginning of the end of the Legend of Baker Mayfield. With lower quality skill position players, Watson is likely to have to force the issue to try and make plays and that may lead to turnovers, limited rushing lanes, and other struggles.

– Cam Newton– He looked good in the Pats’ season opener vs the Dolphins but the Seahawks defense is certainly more than capable of shutting down the running lanes for Newton and forcing him to pass more or, they’ll make him try to beat him with his legs and shutdown all the receivers. Either way, this is gonna be a more defensive struggle than most may want to see.

– Nyheim Hines– He’ll be splitting carries with Jonathan Taylor now that Marlon Mack has been declared out for the season but essentially, Hines will be the Danny Woodhead of this Colts’ offense. Nobody loves a checkdown to a pass catching RB more than Philip Rivers. You can probably even confidently start Taylor if you have him or he’s available and you’re feeling saucy.

– Malcolm Brown – There’s no telling what the split will be for carries between Brown, Cam Akers, and Darrell Henderson but Brown dominating the goal-line carries does likely give him the highest upside. The Eagles D isn’t stopping anyone though so you can likely feel pretty good about starting him if you’re dealing with injuries at the RB position and need a quick fill in.

– Steelers RBs Not Named James Conner – This is tough because Conner is a good back, he’s just Faberge. Hobbled with an ankle injury after six touches in the Steelers’ Monday opener, Benny Snell Jr. did great in relief and Jaylen Samuels got a lot of their 3rd down work. Snell is probably the safer bet to get a heavy workload against a Broncos defense that started strong vs. Derrick Henry but wore down as the game went on.

– David Johnson –  He looked more like the old David Johnson than you would’ve thought against the Chiefs. That said, the Ravens won’t be caught sleeping on him and there’s a good chance they shut the Texans offense down altogether, starting with Johnson’s runs and limiting his pass catching.

– Frank Gore – Frank Gore Positive: Le’Veon Bell will miss 3 weeks at least with a hamstring injury. Frank Gore Negative: He gets to start by running headfirst into the 49ers defense.

– Scotty Miller – Who? Miller is a Bucs receiver who is in line to see some increased workload if Mike Evans is still limited with his hamstring injury and if Chris Godwin is to miss time due to a concussion. There’s multiple reports that Miller and Tom Brady displayed a good chemistry during the limited training camps, plus, Brady’s safety blanket is a white slot receiver so there’s definitely worse gambles you can take.

– Juju Smith-Schuster – A healthy Big Ben made just about the biggest difference for Juju in Week 1, netting him 2 TDs and a bounce-back game after an injury-plagued 2019 season. The Broncos D may prevent him from another two scores but he’s sure to continue to see plenty of targets as long as Ben is under center.

– Marquise Brown – The Texans secondary struggled to cover any of the Chiefs receivers last week. Lamar Jackson seems to be in “F you I can throw deep” mode to start the season. Hollywood Brown is going to be the fastest player on the field and can easily take the top off the Texans defense and find himself connecting with Jackson on large plays throughout the game.

– Chargers WRs – The Chargers lucked into a win due to the Bengals somehow out-Chargering them at the end of the game. Tyrod Taylor was his typical conservative, game-management self and it will continue to greatly limit the fantasy upside of every player in the organization.

– Possibly Tyler Lockett – I’m betting it’ll be Lockett that has to wear Stephon Gilmore all game opening up opportunities for DK Metcalf. If it turns out to be the opposite ahead of the game, flip this and sit Metcalf/start Lockett.

– Dallas Goedert – Likely the number one player on your league’s waiver wire this week, Goedert outplayed Zach Ertz last week and may continue to drive Ertz out of Philly. The Eagles are injured more every day it seems so the TEs may be all Carson Wentz has left to throw to.

– Jonnu Smith – He caught the go-ahead TD for the Titans on MNF and remains a steady option for Ryan Tannehill against an overachieving but exposable Jaguars defense.

–Anyone Else You Have a Hunch About – The TE position absolutely sucks. It’s always so tough. Take a stab on Washington’s Logan Thomas, the Bengals’ C.J. Uzomah, or the Cowboys’ Dalton Schultz and see if you can get lucky and catch a break.

– Zach Ertz – It’s still never a good look when your top TE is publicly questioning if the team wants to keep him during contract negotiations leading up to this weekend.

– Bills – Ryan Tannehill throws so many interceptions. He may burn you for a TD or two but he is going to get you back one way or another.

– Steelers – The Broncos had flashes during their game vs. the Titans but this Steelers D is top-tier and will likely get consistent pressure on Drew Lock, making it very tough.

– Giants – I can’t believe I’m typing this but the Giants defense didn’t look too bad against the Steelers. A couple plays didn’t go their way and the Steelers D stymied their offense so it kinda just got out of hand for them. The Bears and more specifically Mitch Trubisky are a powder keg just waiting to explode at any moment so you could do worse when it comes to streaming options.

– Football Team – Chase Young already looks like a monster and Washington’s line had consistent pressure on Carson Wentz all day. The Cardinals similarly give up tons of sacks and Kyler Murray may be under seige but Kliff Kingsbury’s offense is built to get the ball out of Murray’s hands quickly.

– Cowboys – Well, the first game for the new super-powered Cowboys went almost like every other Cowboys game for the last decade or so. The Falcons are about as hit and miss as it gets but with the Cowboys already minus Sean Lee and now set to lose Leighton Vander Esch for 6-8 weeks, so they will be open to plays from Todd Gurley either from the backfield or receiving, and there’s probably not many corners that can effectively limit Julio Jones.

Good luck in Week 2 this weekend, hopefully we can start to get a better idea for what teams will be able to separate themselves from the field and who are going to be the breakout stars for the fantasy season. 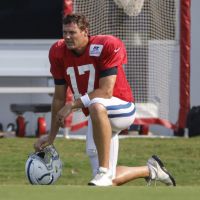